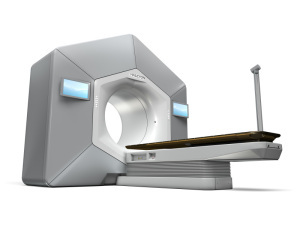 The ultimate goal of radiation therapy has always been to eradicate tumors locally while preventing damage to the surrounding tissue. New technologies aim to make treatment even more precise, while allowing clinicians to better plan treatment strategies and adapt to anatomic changes.

Many of the significant developments in the market come with software for treatment planning and management.

In May, at ESTRO in Vienna, IntraOp Medical introduced a new software package for the Mobetron 2000, its electron intraoperative radiation therapy system.

The software, called the IntraOp Prelude, includes dose and treatment planning as well as treatment management. The software can be installed on computers and tablets, whereas before the launch it was built into a special console.

“Treatment planning in intraoperative radiation therapy is up and coming and not as well established,” says Derek DeScioli, vice president of global sales for IntraOp Medical. “The question is, how do we improve efficiency? The software is about automating and simplifying.”

Treatment planning uses images captured from the patient prior to surgery, but during surgery, the body changes.

“It’s not just the radiation aspect, but because our software device is also capturing surgical factors,” DeScioli says.

While the software does not provide real-time diagnostics, DeScioli says that this is where the software for intraoperative radiotherapy is headed.

“That’s a next frontier for IORT intraoperatives, but it’s not something that exists currently,” DeScioli says.

Making it personal
Personalized medicine is also a new frontier in the radiotherapy market.

The treatment planning software and image guidance technology from Brainlab, which integrates with systems from linac manufacturers such as Varian and Elekta, create indication-specific treatments for cancer patients.

“We truly believe that the software is far more valuable when designed to meet the challenges of specific clinical maladies, instead of a one-size-fits-all approach,” says Bogdan Valcu, director of clinical research for Brainlab. “Seven years ago, we brought together world experts to discuss what would be necessary to personalize medicine for some of the most prevalent cancers. Experts from multiple disciplines provided deep insight into the struggles they had with the tools available and the silos within which they worked.

With an initial focus on its core expertise, Brainlab decided to tackle the challenges of brain metastases as the most prevalent of cranial cancers. There was really nothing on the market designed to treat multiple tumors at a time.”
1(current)
2
3
4
5
6
7