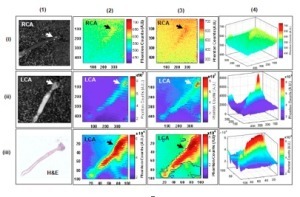 CIRPI imaging of arterial plaque
A new, 360-degree view, hybrid imaging tool, in combination with a nuclear medicine radiotracer, has the potential to “drive a paradigm shift” in the early diagnosis of deadly coronary artery disease, according to a presentation at the 2017 SNMMI meeting in Denver.

The research team that designed and tested the Circumferential-Intravascular-Radioluminescence-Photoacoustic-Imaging (CIRPI) system published its findings in the May issue of the Journal of Nuclear Medicine (JNM). Lead author Raiyan T. Zaman, Ph.D., instructor of cardiovascular medicine at Stanford University School of Medicine, was on hand Sunday at SNMMI to deliver a presentation on the research.

“The CIRPI system can identify the location and composition of the vulnerable plaque in an early stage,” Zaman told HCB News. “No other clinically available imaging modality can do that. Early detection of vulnerable plaque is important as it can prevent catastrophic events of myocardial infarction or stroke.”

For this study, researchers focused on atherosclerotic samples of both human and mouse carotid arteries, and performed CIRPI following injection of fluorine-18 fluorodeoxyglucose (18F-FDG). Photoacoustic lasers were used at different wavelengths to delineate plaque composition. The result was a never-before-seen 360-degree perspective of arterial plaque burden. They confirmed their findings with follow-up radiography, ultrasound, and histology.

In the JNM article, the CIRPI system included a “novel” optical probe used in conjunction with radioluminescence imaging and photoacoustic tomography. The probe can capture a 360-degree view of arterial plaque in real time. The researchers concluded in the article that the CIRPI system amounts to a “paradigm shift” in heading off arterial ruptures.

“The lack of ability to identify early coronary artery disease, one of the leading causes of death in the USA and worldwide, gave me the motivation (to conduct the research),” said Zaman.

According to the American Heart Association, cardiovascular disease, including, but not limited to, coronary artery disease, accounted for more than 17.3 million deaths worldwide in 2013—making it the leading global cause of death. The toll is expected to rise to 23.6 million by 2030. Coronary heart disease is estimated to cost an average of $10.4 billion annually. Such deaths are expected to increase by 100 percent from 2013 to 2030.

Raman said that going forward, research will continue with in vivo animal models, with a goal of translating the CIRPI System into clinical use within three years.

“This is an important and potentially lifesaving tool that could one day be used by interventional cardiologists to identify the appropriate treatment plan for patients at risk of future thin-cap fibro atheroma arterial rupture,” said Zaman.