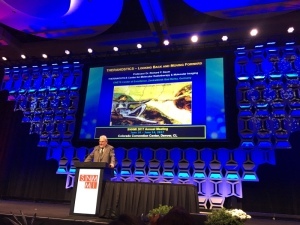 The event, underway in Denver, has brought together roughly 5,000 physicians, other scientists, and technologists.

"To know the future, first we have to look at the present and immediate past," Dr. Johannes Czernin, Department of Molecular and Medical Pharmacology, Ahmanson Transitional Imaging Division, David Geffen School of Medicine at UCLA told the packed auditorium.

In his talk, titled "Imaging with a Purpose: The Future of Nuclear Medicine, Molecular Imaging Therapy," he described a medical specialty in decline. The number of nuclear medicine programs has dropped from about 90 in the 1990s to about 40 today.

“If you look at the trend line, we’ll be nonexistent by 2050,” he mused. He cited several reasons with the most pressing one being a lack of focus on therapies.

But the good news — as he and the following speaker noted — is that the trend is changing.

Theranostics, a combination of therapy and diagnostics, is emerging as a key innovation in tailoring treatments to a patient’s specific case.

“We need to get rid of feelings of inferiority … and promote what we do that works,” Czernin stressed to the crowd.

He shared the current project at UCLA to build a Theranostics Center for outpatient prostate treatment. Specialists who will provide care include urologists, oncologists, endocrinologists and nuclear medicine physicians.

“Radiologists and radiation oncologists are not a good fit for the workflow,” he said, a reference to the new images that can be generated using nuclear imaging to guide treatment specific to each patient.

Baum shared several theranostics cases, including one example of detecting low-level prostate cancer. The forming tumor was not indicated by PSA testing, but was captured at 2mm in size with nuclear imaging – something he implied was difficult with traditional imaging.

In his lecture, titled “Theranostics - Looking Back and Moving Forward” he too made the case that new radiotracer applications are revolutionizing cancer care, with personalized treatments — even "curing the incurable." He spoke specifically of the success of the radio tracer Ga-68 in providing new views and treatments of tumors. Baum also said that theranostics is shifting the focus of treatment for cancer away from the organ where the cancer occurs, to the type of tumor.

Theranostics, he acknowledged, is disruptive – and makes people uncomfortable.

“A new scientific truth is not usually presented in a way that convinces opponents,” Baum said, quoting the German theoretical physicist Max Planck, who won a Noble Peace Prize in 1918. “Rather, the opponents die off, and a rising generation becomes familiar with the truth from the start.”

He proposed that the new and young researchers at the SNMMI meeting were the "rising generation."

In other developments from the opening session, neurosurgeon Dr. Julian E. Bailes – who was portrayed by actor Alec Baldwin in the 2015 movie Concussion about brain injury among NFL players – announced a new $25 million fund to research traumatic brain injury on brain function. The SAFTIE (Scanning to Assess for Traumatic Injury and Encephalopathy) grants will include research on new brain imaging agents.