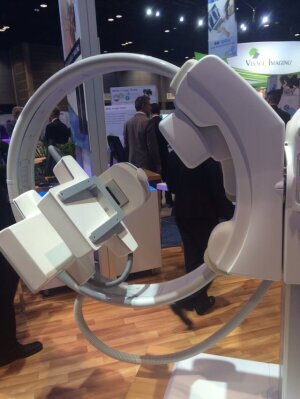 LumaGEM on display at RSNA 2015
The Henry Ford Health System in Michigan has purchased the LumaGEM Molecular Breast Imaging (MBI) system from Gamma Medica, to provide adjunctive screening to mammography for women with dense breasts.

Dr. Patricia Miller, director of Henry Ford’s Breast Imaging Center, said she had seen the equipment set up at ProMedica Breast Care in Toledo, Ohio, and was impressed with its sensitivity.

“We do have a large population of women with dense breasts and we wanted an adjunct that was more sensitive and more specific than whole breast ultrasound,” Miller told HCB News.

A study published in the August issue of the American Journal of Roentgenology, using data from the supplemental screening program at ProMedica Breast Care, found that MBI detected cancer in several women with dense breasts whose mammograms had been negative, with an incremental cancer detection rate of 7.7 per 1,000 screens.

After having a mammogram, 1,696 women with dense breast underwent supplementary screening with the LumaGEM MBI system, resulting in the detection of 13 malignancies, after the mammograms read negative for cancer, the study found. About 85 percent of the cancers found were node negative, meaning they had a better prognosis.

“In medicine, we always like outcome data, but the preliminary data is very promising,” Miller said.

The equipment will be installed at the end of the year at Henry Ford West Bloomfield Hospital. Miller said the health system is breaking ground for a new cancer center in Detroit, and plans to purchase a second LumaGEM MBI system once construction is completed. They plan to screen about 4,000 women per year using MBI. Almost 50 percent of women in the U.S. are diagnosed with dense breast tissue, which makes cancer diagnosis difficult.

Miller said MBI will be offered to woman with dense breasts, without a high risk for breast cancer, every other year, in addition to a mammogram. High-risk women who can’t have an MRI can also be screened with MBI.

While the radiation dose for MBI is higher than that for a mammogram, Miller said the dose has come down in recent years and will likely go even lower.

“Henry Ford Health System’s commitment to install our LumaGEM MBI system validates progress in giving all women, regardless of their breast density, access to accurate breast cancer screenings,” said Philip Croxford, Gamma Medica president and CEO, in a statement. “Our partnership with Henry Ford will open the door for more women who are diagnosed with dense breast tissue to use MBI as a standard secondary screening protocol following digital X-ray mammography and tomosynthesis. We are pleased to be working with such an influential and respected health care system, and helping give women access to the best screening methods available to ensure early detection.”