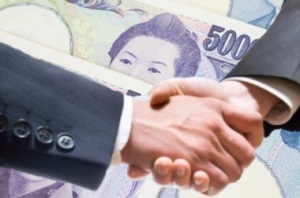 Unprecedented tactics may
have been unlawful
The Canon – Toshiba deal got a regulatory nod of approval Thursday, but also a warning that no one should try its clever acquisition strategy again – or face a criminal complaint.

“We decided to make an announcement about the warning to let everyone know that it is not acceptable, so the same method won’t be used in the future,” Takeshi Shinagawa, director of the Fair Trade Commission's (FTC) mergers-and-acquisitions division, told a news conference, according to Reuters.

He noted that the never-before-used technique, which employed warrants, potentially violated the law – even if no clear rule was broken.

Toshiba avoided problems by selling Canon "MS Holding", a "special-purpose vehicle with $300 in capital that was created just to conduct the transaction," HCB News noted. This stripped voting control from its medical unit and gave it to the vehicle. MS Holding had just three shareholders — the former head of trading house Sumitomo Corporation, a lawyer, and an accountant — each owning one-third of the entity.

Complaints from other Toshiba suitors, notably losing bidder Fujifilm Holdings, expressed outrage over the trick, noting that it "would make a mockery of the law," according to a report at the time by HCB News.

The company also stated that "it is a method that companies like ours, with open, fair and clear policies, could never consider."

Fujifilm was displeased with the FTC decision to let the Canon-Toshiba deal go through. “We demand an explanation for why the scheme was allowed this time when it is not going to be accepted in the future,” the firm stated according to Reuters. “It was an unfair fight for us.”

The tricky maneuver was basically legal but unprincipled according to one expert. "The scheme is slipping through a set of accounting rules regarding special-purpose vehicles," Yuji Hosono, a certified public accountant experienced in corporate auditing, told Reuters when the deal first happened, adding that "it's compliant, but goes against the principle of accounting."

Japanese law requires that an acquisition that might cause antitrust issues be reported to the FTC before any deal. The use of warrants effectively bypassed this requirement.

Canon vowed to address the warning in its future dealings, but admitted no wrongdoing. “We will firmly follow the law while improving transparency of our business,” the company stated.

Toshiba also stated that it felt the deal was legal, but would comply with the warning it received in the future.

The FTC took a much dimmer view of the business scheme. "Canon thought the deal would be approved without problem if they used this method," FTC's Shinagawa said. "This method should not be repeated by any companies and if they do in the future, they could get a red light."

It is highly unusual for the FTC to issue public warnings to companies about deals, he added, noting that "we have made this particular warning public to show how seriously we look at this method."