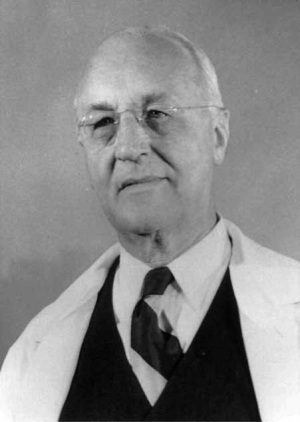 The first successful attempt to remove an entire lung from the human body took about two hours, but the surgeon who performed the operation will forever be known as the father of thoracic surgery. Evarts Ambrose Graham was born on March 19, 1883 in Chicago. After graduating from Princeton University in 1904, he pursued his medical degree at Rush Medical College. After he graduated, Dr. Graham spent a year as an intern at Presbyterian Hospital, where a fellow physician encouraged him to go back to school for additional training in chemistry.

Following his advice, Graham spent a couple of years studying pharmacology at the University of Chicago, where he also met his future wife. He briefly worked at a private surgery clinic in Iowa, and then enlisted in the army. His extensive training in chemistry made him well-suited to focus on the treatment of empyema (accumulation of pus in the chest cavity), a condition that was common among soldiers at the time. Along with his colleagues, Graham developed a successful method for draining the chest cavity while keeping air out to avoid the collapse of the lungs. This technique greatly advanced the treatment of empyema and drastically reduced the soldiers’ mortality rate.

Graham was then assigned to overseas duty, where he served as a commanding officer of a U.S. hospital in France. When he came back in 1919, he was appointed to professor of surgery at Washington University Medical School. During his time there, he helped to advance more accurate diagnoses of various diseases of the gallbladder. Although busy with administrative and teaching duties, Graham also focused on the study of chest diseases.

On April 5, 1933, a gynecologist from Pennsylvania named Dr. James Gilmore was admitted to have surgery to remove cancerous lesions from his lung. Having suffered for years, Gilmore was convinced that his cancer would win. Prior to the surgery, he asked for some time to go home to get dental work done. Years later, he confessed to Graham that he also then purchased a cemetery plot for himself.

When Graham examined Gilmore’s lung on the operating table, he noticed that cancer had spread to both the lower and upper parts of his lung. He consulted with the patient’s friend, explaining that it would be futile to just remove the top part of the lung. Graham suggested that he try to remove the entire thing, an operation that had only been successfully performed in animals before. To the awe of the other clinical staff in the operating room, Graham proceeded to successfully remove the entire lung.

The procedure took about two hours. After the operation, Gilmore needed some additional surgical care, but he was cancer-free. He was discharged after spending 44 days in the hospital, with no need to return. Graham’s achievement – the first successful removal of the entire lung – shook the surgical community.

Graham became the first chairman of the American Board of Surgery when it originated in 1937. His contributions to medicine also got him elected as a member of the National Academy of Sciences in 1941. Throughout his medical career, Graham was very vocal about the dangers of smoking. Whenever he spoke at conferences or met with patients, he never hesitated to urge people to quit and to lecture those in the room about the potential health risks associated with cigarettes. In a cruel twist of fate, Graham himself died of the disease he fought so hard against - lung cancer. He passed away on March 4, 1957, just weeks before his 75th birthday.