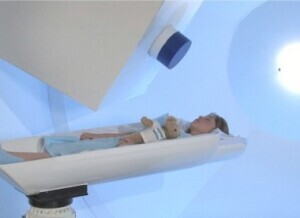 Courtesy of Optivus Proton Therapy
The U.K. government feels confident about proton therapy, even as debates on its value continue. It just set aside $380 million (250 million pounds) to build two proton-beam therapy centers, which are expected to start treating patients in 2018.

Currently, the U.K.'s state-run health system, National Health Service, sends patients in the UK who need or want proton beam therapy to the United States. It's estimated that around 100 patients with difficult cancers, such as brain and spinal tumors, are sent to the U.S. per year.

The new centers, located in London and Manchester, will have the capacity to treat 1,500 patients, according to a statement from the NHS.

The NHS said that it will be able to cut treatment costs in half by having its own centers.

"We want the NHS to have the best cancer treatments available in the world," said Public Health Minister Anna Soubry in a statement. "By investing in Proton Beam Therapy facilities, we will be able to treat more patients in the UK and reduce the stress placed on families who have had to travel to the United States to receive this innovative treatment."

There are currently 12 proton beam therapy centers in Europe and 11 in the U.S. Although many doctors tout the benefits of the therapy, especially for pediatric cases, the technology is controversial due to the high costs of building treatment centers — an investment that requires securing vast amounts of land and large sums of money, which can easily exceed $100 million.

The U.K. government announced in April 2012 that it would provide funding for the NHS to build the two proton therapy centers.

"This is a huge milestone for the NHS — not only will proton beam therapy help save more lives, it will also ensure that patients experience fewer side-effects and have a better quality of life," said Soubry.

Proton therapy for prostate cancer treatment is the main sticking point for proton therapy naysayers. Large, national studies suggested that proton therapy’s value over IMRT in reducing side effects drop off after six months. Its ability to reduce brain damage and other side effects for brain and spinal tumors is well supported by clinical evidence, however.

Cancer Research UK hopes the government also invests more in other types of radiation therapy, such as intensity modulated radiotherapy (IMRT) and image guided radiotherapy (IGRT), that may be a better fit for certain diseases.

“We’re still a long way from fulfilling the Prime Minister's ambition that all cancer patients in England should now have access to the most effective radiotherapy for their cancer,” said Emma Greenwood, Cancer Research UK's head of policy, in a statement.