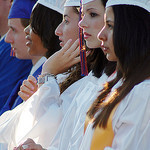 Call it looking out from rose-tinted glasses, but aspiring young doctors appear to have a positive outlook about the future of medicine. According to a new survey from the National Academy of Future Physicians and Medical Scientists, 93 percent of honor high school students said they are very to somewhat optimistic about becoming doctors.

However, nearly one third said they didn't know about the effects of health care reform on the future of medicine. That finding might be surprising to many, since one goal under the law is to attract aspiring physicians into the field of primary care, which is currently in short supply but will be an important force when millions more gain health coverage next year.

Even when these aspiring young physicians have a close family friend who is a physician, more than half don't know the perceived effects of the health care reform law, according to the results. Lisa Rossi, director of public affairs at the National Academy of Future Physicians and Medical Scientists, based in Washington, D.C., said the finding was a bit disturbing and reinforced the organization's role in bringing attention to such things.

This first-of-its-kind survey queried 6,000 current students from high schools all over the country with GPAs of 3.5 or higher with plans to pursue medical careers. Through e-mail, students were asked a range of questions about becoming doctors.

Seventy four percent said they were going into medicine for the doctor-patient relationships and not job security or the money. When asked what field of medicine they were planning on pursuing, pediatrics and surgery came out on top at 18 percent and 17 percent, respectively. Only 7 percent indicated they wanted to go into primary care medicine.

While costs appeared to be a big concern for most of the surveyed students, it did not seem to discourage them from pursuing their dreams of becoming doctors, according to Rossi.

The results appear to contradict many surveys where physicians indicate feeling burned out or regretful they chose to purse a career in medicine.