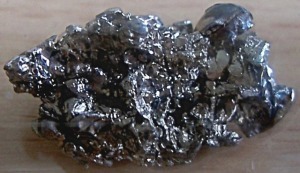 Pure barium
An ongoing shortage of barium contrast media is expected to last a little while longer as the drug maker fills back orders, but the reason for the delay isn't widely known.

Supplies of some formulations of the agent, which is used for fluoroscopic exams of the stomach, gut and esophagus, have been scarce of late, the American Society of Health-System Pharmacists, which helps track drug shortages, said on its website earlier this month.

About a dozen barium sulfate products, including an E-Z Disk tablet for barium swallows and Liquid Polibar for the stomach or small bowel, are listed as unavailable.

"So far we haven't heard from any (of our) radiology groups that there are major delays but it is causing additional difficulties because patients might need to take an alternative," said Erin Fox, a pharmacist and the director of the drug information service with the University of Utah Hospitals and Clinics in Salt Lake City. Her team supplied the ASHP with information on the issue.

Bracco Diagnostics, the distributor of the products, blamed the shortage on a mix of increased demand and "delays" from one of its suppliers.

Fox said the company has not provided more details, but that the dearth of information about what's causing the delay is common to drug shortages, as manufacturers generally are reluctant to provide a lot of data.

"It's very frustrating, but it's also the most common frustration we run into with drug shortages," she said. "This is not unique."

Jeremy Enfinger, who blogs at Topics in Radiology, speculated in a December post that new safety regulations in Chinese barite (barium sulfate) mines, which have led to decreased production of barite, might have something to do with the barium shortage. (China supplies about half the world's barite, according to a Rigzone article Enfinger cites.)

Fox said her organization has been tracking drug shortages since 2001, and this is the first barium shortage they've encountered in that time. It's also somewhat unusual in that most shortages are often for old, generic injectables like morphine, she said. But in other ways the barium products meet the profile of drugs at risk for shortages, because they're generally supplied by only one company, Bracco.

"They're really the only game in town," she said.

American College of Radiology said on its website it believes production on the barium products resumed in November, but Bracco still had to work through its back orders. In its letter to customers last fall, Bracco warned that "with increased demand on all barium products, we may see further supply issues."

Fox said it's not clear when supplies would be back to normal, so it's best to check with wholesalers for updates.

"(Bracco) can't estimate a specific date but they have resumed production and they're trying to fill orders as they come up," she said. "So they just recommend to keep checking from the people you buy this product from."