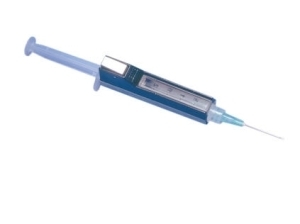 Biodex's Pro-Tec III
Syringe Shield
Starting in the 60s, and even as recently as the 90s, dozens of small shops produced nuclear medicine accessories. But today that number has dwindled down to less than ten - and Biodex Medical Systems, Inc. is the top dog, according to Don Bogutski, president of Diagnostix Plus, Inc.

"Very few companies are left and they are all big," he explains. "They either buy all the products the little job shops make exclusively, or they have brought into their own house the capabilities to manufacture."

Accessories in nuclear medicine are important, because unlike other diagnostic modalities, the patient is used to create the energy that is then made into a diagnostic image. In X-ray, MRI and ultrasound, for example, this energy is produced by an external device.

"The most important aspect of nuclear medicine accessories -- whether PET or SPECT-related -- is to minimize the inadvertent exposure of radiation to the people working with the patient," says Bogutski.

"Radiation has no specific indicator; no specific look, feel, taste or smell," explains Bogutski. "So if you were drinking radioactive milk, you wouldn't know it unless you had a device like a Geiger counter. If you put the Geiger counter's wand next to a cup of radioactive milk, its needle would go way up, off range. But if you put that same wand next to regular milk, you would only hear a few clicks every minute, because everything has some radioactivity in it."

Across the board, accessories for nuclear medicine have evolved to keep up with the new technologies and radiopharmaceuticals that have been developed. As new technologies in other industries become available, companies like Biodex -- which has been involved in nuclear medicine since 1949 -- incorporate improvements into products for the nuclear medicine community. A perfect example is the Atomlab Dose Calibrator, according to Bob Ranieri, Biodex's VP of sales.

"Thirty years ago, pushing buttons and turning knobs operated a dose calibrator; our latest models operate with touch-screen displays, with powerful processors to perform calculations and store the results," he notes.

Shielding accessories, including an array of L-block shields, syringe shields, sharps shields and shipping systems, survey instruments and reference sources, among other components, are currently offered by existing vendors.
1(current)
2