“The demand is incredibly high,” says Dr. Omar Dawood, vice president of global medical affairs for Accuray. “Clinicians want to be assured that when delivering doses of radiation, they’re delivered accurately and precisely.”

“The most popular request we get is for IGRT machines,” says John Marquez, president of Therapy Remarketing Group, which is being rebranded as TRG Oncology Equipment. “I think that’s what most people are looking for these days. If they’re going to be replacing a system, or adding a system, everyone’s looking for that image-guidance capability.” 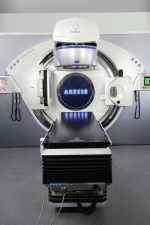 Advanced motion detection is another ongoing trend in radiation therapy that helps to account for the shift in the position of tumors located near organs that move, such as the heart and the lungs.

Manufacturers have also been looking at ways to decrease the amount of time it takes to deliver each treatment. “That is important because during the radiation therapy the patient needs to lie very, very still because any movement in the patient would dramatically impact the results of the radiation,” explains Jain, who estimates that improvements in technology have reduced the time it takes to deliver radiotherapy treatment by up to two-thirds.

What’s new with manufacturers?
Elekta—one of the leading manufacturers of radiation therapy systems—recently acquired Nucletron, who specializes in brachytherapy treatment planning and delivery. “In general, we’re always releasing new products or features that enhance existing products,” says Goldwein. “Mostly that is on the software side because it’s easier to do that. But often it’s devices and accessories that add to existing pieces of equipment, that help to enhance their capabilities and ultimately that help the patients.”

The company recently received clearance to market its Integrity R1.1 in the European Union. The new digital linear accelerator control system has demonstrated treatment time savings of up to 30 percent and is expected to be cleared in the U.S. within the next few months.

Accuray, another key player in the radiation therapy market, recently purchased TomoTherapy, a fellow maker of radiation oncology equipment. Accuray’s most popular system has been the CyberKnife, a robotic radiosurgery system that non-invasively treats tumors located anywhere in the body. Towards the end of 2010 the company received FDA clearance to market its Lung Optimized Treatment, a new component of the CyberKnife VSI System.
1
2(current)
3
4