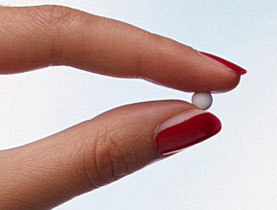 "The current methods are not satisfying the current need," Erin Gainer, CEO of France-based HRA Pharma, told DOTmed News by phone. "The idea here is [ella] is another option, another tool, for women to use."

Plan B and other generic emergency contraceptives became available over-the-counter for girls and women ages 17 years and older last year.

The pill works by delaying ovulation, not terminating a pregnancy, which some critics claim to be the case. The Family Research Council criticizes the FDA for calling the pill an emergency contraceptive, saying the label is deceiving.

"The FDA opted against including the critical fact that ella can cause an abortion on a baby already implanted in its mother's womb in the drug labeling information," said Jeanne Monahan, director of the Center for Human Dignity at the Family Research Council, in prepared remarks.

But that's not true, the drug's manufacturers said. In fact, clinical trials on pregnant animals showed "no indication of signs of malformation or anything like that," said Gainer.

There were several women in the clinical trial who did not know they were pregnant and tested ella. There were no signs of any problems, said Ganier.

FDA spokeswoman Elaine Gansz Bobo told DOTmed News there is "absolutely no reason to be concerned" if a woman takes ella and is unknowingly pregnant. She also pointed out that emergency contraception and abortion pills work completely differently, much of it based on the timing of when a woman takes either pill.

Watson Pharmaceuticals, based in New Jersey, will market the drug, expected to see shelves before the end of the year, said Ganier. The pill has been available to the European market since October 2009, called ellaOne.