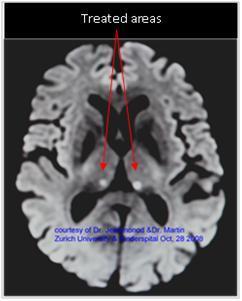 Treated areas of
transcranial-guided
focused ultrasound
While Zurich trials have proven that MR-guided ultrasound is an alternative to invasive surgical procedures for neuropathic pain, the procedure is approved in the U.S. for uterine fibroids. Meanwhile, clinical trials are being conducted for brain disorders, breast tumors and pain from bone metastasis. Trials in the U.S. and abroad for Parkinson's Disease, brain tumors and prostate cancer are expected to start this year.

A team of researchers at the MR-Center at the University Children's Hospital in Zurich recently completed a pilot study using MR-guided focused ultrasound, treating 10 patients with neuropathic pain.

The study was partially funded by the Focused Ultrasound Surgery Foundation, which funds research for clinical trials attempting new therapeutic applications for MR-guided focused ultrasound (MRgFUS), a procedure that is still in its infancy but is expected to be the wave of the future, since it is non-invasive and reduces or eliminates the need for surgery, along with its many complications.

The preliminary results in the patients with neuropathic pain are consistent with conventional therapy--radiofrequency ablation--an invasive procedure that involves making an incision in the scalp, drilling a hole in the skull, inserting an electrode through normal brain tissue into the thalamus, and using radiofrequency to create the lesion.

"The great leap forward is integrating MR with focused ultrasound," Rolf Taylor, director of communications for the Focused Ultrasound Surgery Foundation, tells DOTmed News. "Focused Ultrasound is non-invasive. The source of focused ultrasound energy for this type of brain treatment is outside of the body, yet it creates a focal point of energy deep in the brain," Taylor says. "The procedure heats the target tissue at the focal point in a very controllable way, all the time monitored using intraoperative MR imaging and MR thermometry."

Taylor says MR technology has led to what he calls "the most advanced thermometer in the world." MRI thermometry provides a detailed thermal map in real time," he says. "Because focused ultrasound creates heat, the medical team can see exactly what is happening in real time without doing invasive surgery."

So by combining the traditional MRI view to locate the target site for ablation, and MR thermometry, it is possible to precisely ablate the target tissue non-invasively using focused ultrasound while monitoring the procedure, Taylor says.
1(current)
2