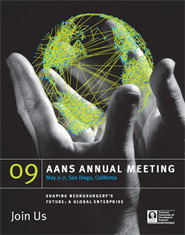 Neurologist exhibited new
new technologies in oncology
at the American Association of
Neurological Surgeons
Trials showing the efficacy of cortical stimulation to beat treatment-resistant depression; a surgical pump for post-herpetic neuralgia; and an implantable camera that slices nerves to stop excessive sweating in teens, were just a few of the studies presented at the American Association of Neurological Surgeons 77th Annual Meeting last week.

Neurologists also exhibited new techniques in oncology. For example, one study found that in spinal tumors, using lower doses of radiosurgery with the Gamma Knife is not only effective but preserves hearing, typically impaired when spinal tumors are resected.

To see the latest neurosurgical research, go to: http://www.aans.org/. Meanwhile, here's a DOTmed News roundup of some novel devices:

An investigational technique called cortical stimulation may offer an alternative for patients who have suffered from major depression for years, but who have failed to respond to treatment with anti-depressants, according to a new study presented by Emad Eskandar, MD, from Massachusetts General Hospital and Harvard Medical School.

Dr. Eskandar said that imaging and transcranial magnetic stimulation trials have demonstrated that the left dorsolateral prefrontal cortex (DLPFC) area of the brain plays a critical role in patients with major depressive disorder. These findings prompted him to target electrodes to this region of the brain.

He recruited 12 patients for this pilot study. The patients received either sham stimulation or active treatment for eight weeks. After this period, all patients were switched over to active treatment.

During the minimally invasive procedure, the electrodes were placed epidurally, via a small craniotomy. Patients' depression was assessed using several rating scales, including the well-known Hamilton Depression Rating Scale.

At 8 weeks, Hamilton scores showed that depression improved by 22 in the active treatment group versus 3 percent in the sham group. Scores of well-being on the other rating scales also climbed.

What's more, patients continued to feel better when they were tested at six months and again one year following the initial surgery.

Dr. Eskandar reportedly told attendees at the conference that patients in his study had been ill for many years and had no other options available to them. On average, they had tried 10 medications but failed to respond to any of them.
1(current)
2
3
4
5