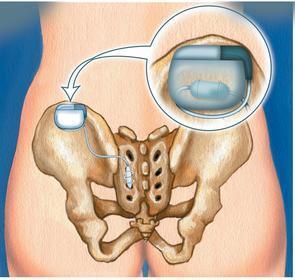 Medtronic's Interstim
may control overactive
bladders
[Note: A correction is appended to this story.--Ed.]

For people with urinary incontinence who have run out of options, an electrical device being tested by Medtronic might help, according to a new Cochrane Library review.

The battery-operated implant, called InterStim, consists of two small electrodes placed beneath the skin, near the sacrum or "tailbone," to give a continuous shock to the nerves that control the bladder, causing the person to feel an uninterrupted tapping sensation in the pelvic area.

"There are few treatments that can claim to cure people with overactive bladders or urinary retention," said lead author G. Peter Herbison, from the Dunedin School of Medicine in New Zealand. "It is possible that implanted pulse generators will do just that."

"Depending on how it is defined, around 17 million people in the U.S. may have bladder control problems," said Kenneth Peters, M.D., chairman of urology at Beaumont Hospital in Royal Oak, Mich. Some people respond to medications, behavioral therapy or other noninvasive means, while surgery is useful mostly for those with stress incontinence," he said.

Herbison and his co-author wanted to determine the effects that this type of device had in people with urine storage and voiding problems. They reviewed eight published studies involving 500 patients who had not responded to other less invasive treatments.

Overall, the results showed benefits primarily for patients with symptoms of overactive bladder and with no known obstruction who had failed other methods of treatment.

"For those who have tried all nonsurgical approaches, including bladder retraining, physiotherapy for the pelvic floor muscles and medications, yet the symptoms persist, it is worth discussing this option with your primary care doctor, who may refer you on to a urologist," said review co-author Dr. Edwin Arnold, at the department of urology at Christchurch Hospital, in New Zealand.

He notes that "this treatment is not for everyone and even if the operation is undertaken, it does not always work, so a patient's expectations should remain realistic."

Those who would benefit from the procedure fall into two groups: patients who have failed all nonsurgical approaches and whose symptoms remain bothersome and persistent, Arnold said. "This includes men and women who have increased daytime frequency of passing urine, who need to rise at night to empty the bladder and those who experience an urgency that interferes with daily activities."
1(current)
2