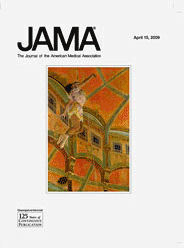 Potentially significant
findings on diabetes care
Routine screening for coronary artery disease in type 2 diabetes patients with no symptoms of angina or a history of coronary disease is unnecessary and may lead initially to more invasive and costly heart procedures, according to researchers at Yale School of Medicine. They report their findings in the April 15 Journal of the American Medical Association.

"Patients with type 2 diabetes with no symptoms who are feeling well can generally be managed effectively with preventive therapies such as lipid-lowering drugs, blood pressure medication, aspirin and diabetes treatment," said Lawrence Young, M.D., professor of medicine at Yale School of Medicine.

His team spearheaded the "Detection of Ischemia in Asymptomatic Diabetics" study in which 1,123 participants were randomly assigned to either a screening stress test that looks at the blood flow to the heart, or to a group who received no screening. Participants enrolled at 14 centers in the United States and Canada and were evaluated during a five-year time span.

"On the other hand, he cautioned, stress testing has an important role in evaluating patients with type 2 diabetes who have symptoms suggesting heart disease, since these individuals are at very high risk.

"This is a bit of good news in the field of diabetes where patients and their physicians have real concern for heart disease. In patients getting modern medical therapy in our study, serious heart problems were infrequent," said Young.