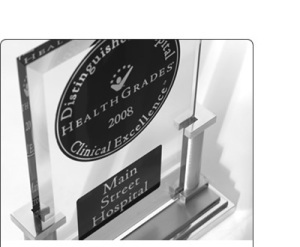 HealthGrades Inc.
HealthGrades Inc., an independent organization that has been rating 5,000 non-federally funded U.S. hospitals for six years, has identified 242 top hospitals this year and has honored them with its 2009 Patient Safety Excellence Award.

HealthGrades says it developed the award to give patients more information about choosing a hospital. In addition to hospitals, the agency gathers information on physicians, nursing homes and prescription drugs so that patients can choose the best providers and medicines. More information on the company can be found at http://www.healthgrades.com.

The hospitals winning high marks represent an elite group that save lives, money and prevent errors at a higher rate than other U.S. hospitals, HealthGrades says.

The agency calculates that if all hospitals performed at the level of the top tier, approximately 211,697 patient safety events (also called "never events") and 22,771 Medicare deaths could be avoided.

* Between 2005 and 2007 these patient safety events were associated with over $6.9 billion of wasted healthcare dollars.

* Eight patient safety indicators showed improvement while seven indicators worsened in 2007 compared to 2005. Some of the most common and most serious errors worsened, including: bed sores, sepsis, respiratory failure, deep vein thrombosis and pulmonary embolism.

* Between 2005 and 2007 there were 97,755 in-hospital deaths that occurred among patients who experienced one or more of 15 patient safety events. These were:

Commenting on the ratings, Rick May, M.D., senior physician consultant at HealthGrades and co-author of the study said that, "patient safety incidents are one of the leading causes of death in the U.S. The sad fact is that many, if not most, of these errors are preventable. Patients shouldn't die or experience unnecessary harm as a result of medical errors in hospitals." He adds, "The good news is that there are hospitals that are doing an amazing job when it comes to patient safety and we commend them. Patients need to know that they have a substantially lower risk of experiencing a medical error and therefore a lower risk of death or complications when they are admitted to one of these exceptional top-performing hospitals."