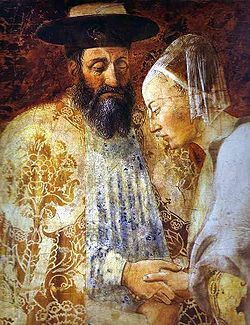 King Solomon
Researchers at the University of California, San Diego School of Medicine, have compiled the first-ever review of the neurobiology of wisdom, once the sole province of religion and philosophy.

The study by Dilip V. Jeste, MD, and Thomas W. Meeks, MD, of UC San Diego's Department of Psychiatry and the Stein Institute for Research on Aging, was published in the Archives of General Psychiatry on April 6.

"Defining wisdom is rather subjective, though there are many similarities in definition across time and cultures," said Jeste, who is the Estelle and Edgar Levi Chair in Aging, professor of psychiatry and neuroscience and chief of geriatric psychiatry at UC San Diego. "However, our research suggests that there may be a basis in neurobiology for wisdom's most universal traits."

Components of wisdom are commonly agreed to include such attributes as empathy, compassion or altruism, emotional stability, self-understanding, and pro-social attitudes, including a tolerance for others' values.

In order to determine if specific brain circuits and pathways might be responsible for wisdom, the researchers examined existing articles, publications and other documents for six attributes most commonly included in the definition of wisdom, and for the brain circuitry associated with those attributes.

Meeks and Jeste focused primarily on functional neuroimaging studies, studies which measure changes in blood flow or metabolic alterations in the brain, as well as on neurotransmitter functions and genetics. They found, for example, that pondering a situation calling for altruism activates the medial pre-frontal cortex, while moral decision-making is a combination of rational (the dorsolateral prefrontal cortex), which plays a role in sustaining attention and working memory), emotional/social (medial pre-frontal cortex), and conflict detection (the anterior cingulate cortex), sometimes also associated with a so-called "sixth sense".

Interestingly, several common brain regions appear to be involved in different components of wisdom. The UC San Diego researchers suggest that the neurobiology of wisdom may involve an optimal balance between more primitive brain regions (the limbic system) and the newest ones (pre-frontal cortex.) Knowledge of the underlying mechanisms in the brain could potentially lead to developing interventions for enhancing wisdom, the researchers say.

"Understanding the neurobiology of wisdom may have considerable clinical significance, for example, in studying how certain disorders or traumatic brain injuries can affect traits related to wisdom," said Jeste, stressing that this study is only a first step in a long process.