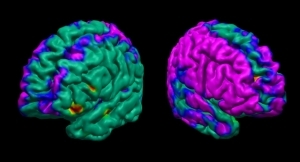 Right hemisphere thinning
Findings from one of the largest-ever imaging studies of depression indicate that a structural difference in the brain--a thinning of the right hemisphere--appears to be linked to a higher risk for depression, according to new research at Columbia University Medical Center and the New York State Psychiatric Institute.

Published in the upcoming online edition of the Proceedings of the National Academy of Sciences, researchers found that people at high risk of developing depression had a 28 percent thinning of the right cortex, the brain's outermost surface, compared to people with no known risk.

The cerebral cortex is the part of the brain that governs planning, reasoning and mood. Thinning of the cortex may hinder these functions, researchers say.
"If you have thinning in this portion of the brain, it interferes with the processing of emotional stimuli," Dr. Peterson said. "We think that's what makes [people] vulnerable to developing anxiety and depression--it essentially isolates them in an emotional world."

The drastic reduction surprised researchers, which they say is on par with the loss of brain matter typically observed in persons with Alzheimer's disease and schizophrenia. "The difference was so great that at first we almost didn't believe it. But we checked and re-checked all of our data, and we looked for all possible alternative explanations, and still the difference was there," said Dr. Bradley Peterson, director of Child & Adolescent Psychiatry and director of MRI Research in the Department of Psychiatry at Columbia University Medical Center and the New York State Psychiatric Institute, and lead author of the study.

Additional tests measured each person's level of inattention to and memory for such cues. The less brain material patients had in the right cortex, the worse they performed on the attention and memory tests.

One of the goals of the study was to determine whether structural abnormalities in the brain predispose people to depression or are a cause of the illness. Dr. Peterson said, "Because previous biological studies only focused on a relatively small number of individuals who already suffered from depression, their findings were unable to tease out whether those differences represented the causes of depressive illness, or a consequence."
1(current)
2