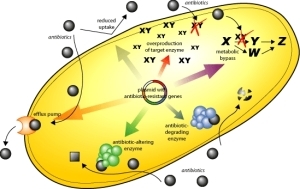 cationic peptide
Researchers at the University of British Columbia have discovered a mimic of one of "nature's antibiotics" that can be used to coat medical devices to prevent infection and rejection.

The study, published in the journal Chemistry and Biology, found that a synthetic form, short tethered cationic antimicrobial peptides (cationic peptide), can protect surfaces, like those of medical devices, killing bacteria and fungi that come into contact with them. (Peptides are small proteins.)

Medical devices such as surgical implants, catheters, hip replacements, and joint prostheses have the potential to become infected with bacteria, leading to many medical problems including degeneration or rejection of the implant. Currently, the metal silver is sometimes used to coat medical devices because of its antimicrobial properties.

Nature's antibiotics are short natural peptides that are produced by all complex organisms including humans and animals, for protection against microbial infections. These peptides can be found in cells and tissues, on the skin and mucosal surfaces and in fluids like blood, sweat and tears.

"The rapid progress of biomedical technology and an aging population places increasing demands on medical implants to treat serious tissue disorders and replace organ function," says Robert Hancock, principal investigator and Canada Research Chair in Pathogenomics and Antimicrobials at UBC's Department of Microbiology and Immunology. "The risk of infection after surgical implantation ranges from one to seven per cent, but is associated with considerable morbidity, repeated surgeries and prolonged therapy."

"These cationic peptides are currently being developed as soluble antibiotics for administration to patients to combat infection," says Hancock. "We have developed a new method for finding a variety of effective peptides that can bind to a surface and still kill harmful bacteria and fungus."

"Infections associated with the insertion of surgical implants are a common and serious complication," says Hancock "Prevention of such infections remains a priority and in particular there is an urgent need to coat the surfaces of medical devices, including implants, with antimicrobial agents to reduce the risk of infection."

In the field of orthopedic implant surgery about 2 million fracture-fixation devices and 600,000 joint prostheses are implanted every year in the
United States.