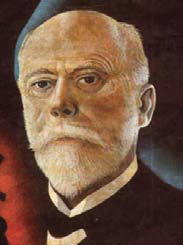 On March 22nd, 1905, Dutch physiologist Willem Einthoven used telephone communications networks to transmit something a bit different than the usual conversation. In fact, it's doubtful there were many people alive at the time that could have made heads or tails of the message being sent. You see, on that date, Einthoven brought his research to a culmination by transmitting and recording the first telecardiogram.

The experiment and trials had begun earlier in the year when Einthoven transmitted electrocardiograms between a hospital and his lab by phone line over a distance of about one mile.

By the time Einthoven had begun to make a name, electrocardiograms (ECGs or sometimes EKGs) had been around for nearly a century. However, the early ECGs were impractical as the equipment wasn't sensitive enough to register electrical discharges from the heart.

Einthoven built upon the research of physiologist Augustus Desire Waller, who in 1887 was able to register the current of the heart as deduced from the body surface by using a capillary electrometer. Einthoven watched Waller demonstrate the feat during the First International Congress of Physiologists two years later. He was able to repeat the experiment on his own and further refine the technique.

In 1901, Einthoven invented a new galvanometer to produce electrocardiograms using a fine quartz string coated in silver. His "string galvanometer" weighed 600 pounds. A similar machine was constructed earlier by Clement Ader but the lower sensitivity of Ader's machine was considerable and hobbled its usefulness.

Although his work up to that point had far-surpassed most of his peers, Einthoven continued to create innovations and unearth more discoveries about the heart. In 1912, his research on the explanation of the respiratory changes in the electrocardiogram led him to the scheme of the equilateral triangle, considering the extremities as elongations of the electrodes. The information received from the contacts thus represents the projection of what takes place in the heart. With simultaneous registration of the three contacts, the size and direction of the resultant of all potential differences in the heart could be calculated minute by minute. Clinical electrocardiograms were studied by connecting heart patients in the academic hospital to the instrument in Einthoven's laboratory by means of a cable.
1(current)
2