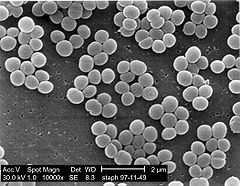 Staphylococcus can grow
as a biofilm with the aid of zinc
In studies that could lead to new ways of preventing hospital-acquired infections, a team of University of Cincinnati (UC) researchers are exploring a so-called "zinc zipper" that holds bacterial cells together and plays a key role in killing dangerous bacteria.

In an article appearing in the Dec. 1 online edition of Proceedings of the National Academy of Sciences, researchers in UC's department of molecular genetics, biochemistry and microbiology, found that the presence of zinc is crucial to the formation of infection-causing biofilms.

Staphylococci can grow as biofilms, which are specialized communities of bacteria that are highly resistant to antibiotics and immune responses. They are remarkably adhesive and can grow on many surfaces, including implanted medical devices such as pacemakers, heart valve replacements and artificial joints, UC researchers say.

Researchers in the lab of Andrew Herr, PhD, an assistant professor and Ohio Eminent Scholar in structural biology, found that zinc causes a protein on the bacterial surface to act like molecular Velcro, allowing the bacterial cells in the biofilm to stick to one another.

"We've shown that if you remove the zinc, you prevent the biofilm from forming, and if you add zinc back, the biofilm can grow," says Herr. "So we're hopeful that we can use this sort of approach to prevent these biofilms from ever taking hold in the first place."

The most practical applications, Herr says, might involve coatings for implanted medical devices, or rinses that a surgeon could use to clear the area around the implant.