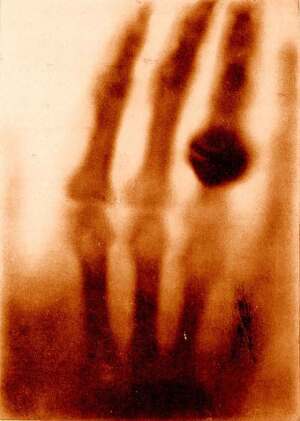 If you are ever in Germany and break a bone, you may want to ask for a Röntgen ray of the injury. Outside of Germany, it's less likely that care providers will know you're asking for an X-ray.

On November 8, 1895 Wilhelm Röntgen (1845-1923) made a discovery that would revolutionize the medical industry and go on to benefit millions.

Röntgen decided to take a break from working on his experiments with electricity and magnetism to investigate Crookes tube. This tube, when saturated with high voltage would produce cathode rays. Due to a fortunate occurrence where a paper coated with barium platinocyanide happened to be in the right place at the right time, X-rays were discovered.

Röntgen noticed that the paper, which was lying on a table, was emitting a glow when the tube was powered up. Although cathode rays would cause it to glow, the paper was too distant for the rays to reach. Therefore, Röntgen deduced that a new unknown type of ray must be reacting with the coating on the paper. Not having a name for the ray, he substituted "X" to stand for the unknown.

Röntgen continued to experiment over the course of six weeks, determining what materials this mysterious ray could penetrate. He discovered that it would pass through centimeters of wood and glass, but would be stopped by metals. He also took X-ray photographs. In photographs where he held an item, the bones of his fingers could be seen. After extensive experimentation, on December 22, 1895, he brought his wife to his lab to show her what had been keeping him from home so often. It was then, that one of the most famous photographs in medical history was taken. Mrs. Röntgen's hand was photographed clearly showing the bones and her wedding ring. His wife was quite disturbed to see through skin to her bones.

From there, it was a whirlwind. Röntgen drafted a short paper about his discovery and circulated this along with the photo of his wife's hand to the medical community. The discovery was quickly embraced and doctors across the world were using X-rays to investigate fractures and breaks and to find bullets lodged in flesh. The usefulness of Barium salts was also discovered quickly and X-rays were then employed to show digestive tracts.

The X-ray wasn't limited to medicine. Shoe stores offered X-rays so customers could be entertained watching their toes moving on the fluorescent screens. Department stores also offered them as entertainment. Thomas Edison built an X-ray source that offered a view of the whole body - and people eagerly came to see what they were made of - literally. Edison also made the unfortunate discovery of radiation sickness as Clarence Dally, his assistant, was the first to ever be affected by it.

Röntgen won the Nobel Prize for his discovery in 1905. He never sought to patent the discovery and he donated much of his prize money to universities and science to further the research, considering it his gift to mankind. Today, his discovery has been expanded upon, serving as the foundation for a number of machines, applications and treatments, truly becoming a greater gift that he could have expected.