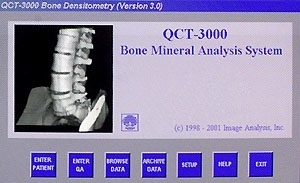 CT bone density screening
Children and teenagers with even mild cases of anorexia exhibit abnormal bone structure, according to a new study appearing in the December issue of Radiology and to be presented at the annual meeting of the Radiological Society of North America (RSNA).

"Adolescence is the most critical period for growth of bone mass, and the onset of anorexia interferes with that process," said Miriam A. Bredella, M.D., musculoskeletal radiologist at Massachusetts General Hospital and assistant professor of radiology at Harvard Medical School in Boston. "Impairment of bone development may permanently alter bone structure and increase the risk of fractures and osteoporosis in adult life."

Anorexia is an eating disorder characterized by emaciation, distorted body image and intense fear of gaining weight. People with the disorder are obsessed with weight control and often perceive themselves as overweight, even when they are dangerously thin. The disorder primarily occurs among young women and affects one in 100 adolescent girls, according to the National Women's Health Information Center.

Among the many health problems associated with anorexia is bone loss. Typically, dual energy x-ray absorptiometry (DXA) is used to test bone mineral density in adolescents with anorexia.

Dr. Bredella and colleagues set out to determine if alterations in bone structure occur before significant decreases in bone mineral density become evident. The researchers used high-resolution, flat-panel volume computed tomography (CT) and DXA to study 10 adolescent girls, age 13 to 18, with mild anorexia The new, high-resolution CT exam allowed the researchers to identify differences in bone structure between the patients with anorexia and the healthy controls, whereas bone mineral density measurements obtained using DXA did not.

"Our data suggest that reassuring values of bone mineral density obtained using DXA may not reflect the true status of bone structure in this undernourished population," Dr. Bredella said. "In patients with anorexia, bone structure should be analyzed to detect abnormal bone health."

Flat-panel volume CT allows the examination of bone at high resolution with relatively low radiation exposure, making it a suitable technique for evaluation of bone structure in adolescent patients, she said.