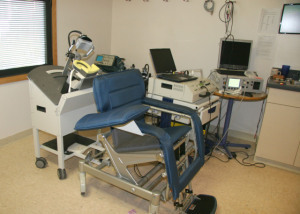 TMS chair
The first electro-magnetic device to be approved for depression has passed FDA muster.

Neuronetics Inc., a privately held company in Malvern, PA, developed the device, called NeuroStar Transcranial Magnetic Stimulation (TMS) Therapy. eTMS therapy involves an electro-magnetic coil that turns on and off, creating a small, electric current in the brain, says Mark George, M.D., Professor of Psychiatry and Neurology at the Medical University of South Carolina (MUSE), who conducted the clinical trials. TMS was also tested on patients at Columbia Medical Center.

Dr. George has been developing the use of TMS since 1993. He tells DOTmed News that unlike Electro Convulsive Therapy (ECT), which produces a seizure in patients so they have to be put to sleep, TMS is not at all painful and requires no anesthesia. With TMS, people can leave their doctor's office without a caretaker after a 40-minute, brain-tuning, typically administered for four to six weeks.

Dr. George says that when patients try TMS, they sit in a comfortable seat that looks like a dentist's chair. The doctor puts the TMS coil over the prefrontal cortex, part of the brain that serves as a rational counterpart to the brain's deep-seeded, highly emotional limbic system, which evolutionarily, was developed long before the prefrontal cortex and often engages in "fight-or-flight behavior.

Dr. George uses a snake analogy to explain the two brain parts: "Say you have a snake phobia and a friend wiggles a snake in front of you, your limbic system would see it as a real snake and you would scream. Your prefrontal cortex would then soothe the fear by recognizing that the snake was only pretend. By stimulating the cortex, we're trying to restore the balance between the cortex and the limbic system and therefore overcome depression," Dr. George says.

"Back in 1993," he adds, "I began my career doing brain imaging. In depressed people, both the prefrontal cortex and the limbic system looked abnormal in brain scans. They were either low functioning or hyper-functioning in depressed and bipolar people."

"These are people who are looking for new options. And while TMS is not pleasant--it feels like someone is rubbing an eraser on your head--there are no side effects like with pills, which sometimes cause weight gain or cognitive slowing and sexual dysfunction," he says.