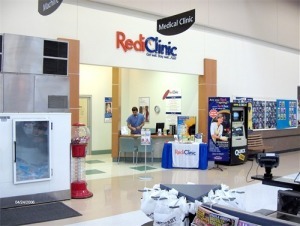 Retail medical clinic
Retail medical clinics located in pharmacies and other stores typically attract insured and uninsured patients who are seeking help for a small group of easy-to-treat illnesses or preventive care and do not otherwise have a regular health care provider, according to a new RAND Corporation study.

"These clinics appear to attract patients who are not routine users of the current health care system," said lead author Dr. Ateev Mehrotra, a professor at the University of Pittsburgh School of Medicine and a researcher at RAND, a nonprofit research organization. "For these patients, the convenience offered by retail clinics may be more important than the continuity provided by a personal physician."

The RAND Health study is the first to examine the types of patients who use the retail clinics and the health care services delivered by the clinics, which are growing in number and popularity. The findings are published in the September/October of the journal Health Affairs.

Researchers analyzed details about more than 1.3 million visits to retail clinics from 2000 to 2007. The information was obtained from eight retail clinic operators that accounted for three-quarters of the clinics in operation as of July 2007. Information from that analysis was compared to national data on visits to both emergency departments and primary care physician offices. Among the findings reported by researchers:

* Patients visiting retail clinics when they first opened were likely to pay the cost out of their own pocket, but most patients are now using insurance to pay the bills. The percentage of retail office visits paid for out-of-pocket dropped from 100 percent in 2000 to 16 percent in 2007.

The RAND study did not assess the quality of care provided by retail clinics. Among the concerns expressed about the clinics is that they may disrupt relationships with primary care physicians.

"Since most of these patients do not have a primary care physician, there is no relationship to disrupt," Mehrotra said. "However, future studies should investigate quality, the likelihood that patients are getting needed preventive and follow-up care."

Retail medical clinics are typically located in drug stores and other large retail chain stores such as Target and Wal-Mart rather than in medical facilities. There are now almost 1,000 retail clinics in the United States and it is estimated there may be 6,000 by 2011.

"There is a lot of curiosity and questions about retail health clinics because they are a new way of providing care in a system of health that has seen little change over the past 50 years in how care is delivered," Mehrotra said.