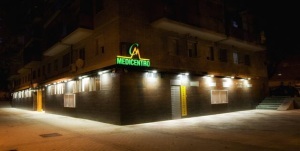 With both organizations, Affidea’s reach now extends to 312 centers across 15 European countries, and provides more than 10 million patients it sees annually access to over 11,200 professionals.

Both deals follow five others completed by Affidea this year alone. In Spain, patients under Affidea will have direct access to multispecialty private healthcare service at Medicentro. In Northern Ireland, Hillsborough offers patients a range of outpatient surgical procedures, as well as access to numerous specialties.

"The acquisition of Medicentro in Spain signals the entry of Affidea in the ambulatory service market which will be the area of focus in our strategic inorganic development in the following years, while in Northern Ireland we have already established a strong and resilient network of outpatient and diagnostic imaging services through the addition of Hillsborough and Orthoderm clinic, which was acquired earlier this year," Affidea CEO Giuseppe Recchi told HCB News.

Medicentro and Hillsborough both add an extensive range of specialty consultations, blood collection points and same-day surgery procedures that align with Affidea's core business of diagnostic imaging. With the company's integrated service model and these two new additions, patients will have faster and easier access to care, says Recchi.

The two deals follow other recent expansions the company has made in Italy, U.K. and Croatia, and are two of 17 acquisitions it has completed in the last 24 months. In that time, it has expanded its network with 43 new medical centers, most of them to support its outpatient offerings and complement its core business of diagnostic imaging. Since 2019, Affidea has acquired and integrated 85 medical centers into its network of outpatient and laboratory service providers. This includes providers in Italy, Greece, Portugal, Lithuania, Romania, Croatia and the U.K.

At Medicentro, patients can see outpatient specialties in family medicine, cardiology, dermatology, gynecology, ophthalmology, traumatology, as well as for diagnostic imaging and blood collection points. Its addition brings three outpatient centers in Southwest Madrid to Affidea Spain and will provide private healthcare access to privately insured patients and PHIs. Additionally it expands the company’s reach in Spain to 47 centers that have over 730 professionals (with 145 at Medicentro) serving over 390,000 patients annually. Its acquisition follows another one completed by Affidea in January of Gamma Clinica, a Spanish nuclear medicine provider.
1(current)
2
3