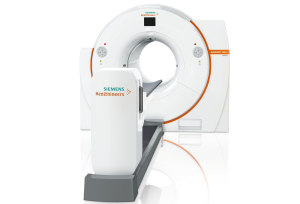 The scanner, which is designed for both clinical and research use, features a 106-centimeter axial FoV that is four times the PET axial FoV of the company’s Biograph Vision 600," said John Khoury, the U.S. vice president of Molecular Imaging at Siemens Healthineers North America. "The new scanner has the same 3.2-millmeter silicon photomultiplier (SiPM) detector technology and Time of Flight (ToF) performance, and the extended FoV allows clinicians to image all the vital organs simultaneously with higher sensitivity."

“This has the axial field of view of four Vision 600s,” Khoury told HCB News. “What this means is that clinicians can now observe organ-to-organ interaction.”

The large FoV allows clinicians to examine patient anatomy during radiopharmaceutical uptake in shorter periods of time and allows for radiation oncology planning for larger patients, Khoury said. Scans, particularly for pediatric patients, can also be done faster and at a potentially lower radiation dose. It also has applications in therapy research.

In Europe, where the Biograph Vision Quadra is already approved and in use since receiving a CE Mark last fall, clinicians are using the scanner for high throughput images, cut from 20 minutes to three to five minutes.

“It’s going to give our customers new ways of addressing clinical problems,” Khoury said. “We’re excited to see what our customers do with this.”

The Biograph Vision Quadra can be installed in the same footprint as a traditional PET/CT scanner, so no additional construction is necessary to accommodate the scanner, which has a 78-centimeter bore.