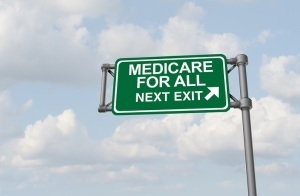 The American College of Physicians (ACP) has thrown its support behind "Medicare for All" along with a public option in order to further the goal of universal coverage.

It made the case for the endorsement in a series of papers appearing as a supplement in the journal Annals of Internal Medicine.

“Currently, the United States is the only wealthy industrialized country that has not achieved universal health coverage,” the group stated in its position paper. “The nation's existing health care system is inefficient, unaffordable, unsustainable, and inaccessible to many.”

It made a number of recommendations as part of improving U.S. healthcare delivery, including, “transitioning to a system that achieves universal coverage with essential benefits and lower administrative costs through two potential approaches: a single-payer financing system or a publicly financed coverage option with regulated private insurance,” it stated in its coverage of the papers.

Calling the papers both extensive and forward-thinking, the group noted that, as internal medicine physicians, its members faced challenges on a daily basis in their efforts to deliver care in the current system.

“We can and must imagine what a better health care system looks like, and be committed to attaining it. ACP, through this vision, is willing to accept that challenge, and calls on others to join us. We believe the status quo is an unsustainable model for our country and most importantly, our patients,” stated Dr. Robert McClean, president of the ACP, adding, “all of us deserve better and better is possible.”

The organization stressed that under either a single-payer or public option model “cost-sharing should be eliminated and payments to physicians and other health professionals, hospitals, and others delivering health care services must be sufficient to ensure access and not perpetuate existing inequities including the undervaluation of primary and cognitive care.”

In addition it called for bigger payments to primary and cognitive care providers, a redefinition of present performance measures to stress value to patients and aligning incentives to “better outcomes and lower costs.”
1(current)
2