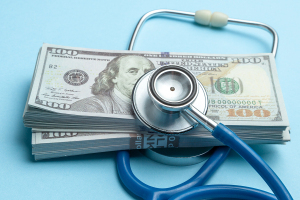 Total national healthcare spending in 2018 grew 4.6 percent — slower than the overall GDP growth of 5.4 percent for the same period, said a new report by the CMS Office of the Actuary.

The study appeared online in the journal Health Affairs.

“Spending has to slow down when it gets so big,” Paul Hughes-Cromwick, the co-director of sustainable health spending strategies at the research group Altarum, told The New York Times. “There’s no question that there are efforts all across the environment to try to control this beast. There’s no question about that, and some of them are working.”

Hospitals accounted for the biggest part of healthcare spending — $1.2 trillion, or 33 percent of the total spend in 2018, according to the report.

Medicare spending was 21 percent of total healthcare spending — and was up 6.4 percent to $750.2 billion in 2018, impacted again by the insurance tax on Advantage plans.

Medicaid spending accounted for 16 percent of total health spend — up 3 percent to $597.4 billion, again influenced by the the health insurance tax.

Hospitals had recently been a focus of administration efforts to battle costs, when new rules were issued that would require disclosure of the rates paid to insurers prior to patients getting services.

Hospitals groups sued the government last week in an effort to challenge the rules' legality.

“Instead of giving patients relevant information about costs, this rule will lead to widespread confusion and even more consolidation in the commercial health insurance industry," Rick Pollack, president and CEO of AHA, said in a statement at the time.

“Hospitals should be ashamed that they aren’t willing to provide American patients the cost of a service before they purchase it," HHS spokeswoman Caitlin Oakley told The Hill last week. "President Trump and Secretary Azar are committed to providing patients the information they need to make their own informed health care decisions, and will continue to fight for transparency in America’s health care system.”