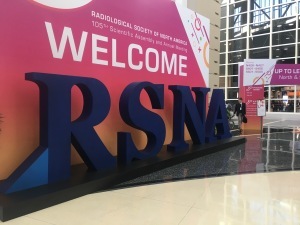 Fujifilm has expanded its server-side viewer platform to cardiology with the Synapse 7x, which it highlighted at the RSNA annual meeting in Chicago.

"All of the AI use cases that we're showing are part of the 7x platform," Lacy told HCB News.

The company also showcased works-in-progress artificial intelligence (AI) applications for radiography, including technology that highlights foreign objects, such as surgical gauze, that have been left behind during surgery.

The operating room AI technology was demonstrated on the FDX Console, designed to be paired with Fujifilm mobile X-ray systems and used for images acquired during or after surgery to find difficult-to-visualize objects, such as gauze and sponges.

In an example on display in the Fujifilm booth, 10 foreign objects were viewable on traditional X-ray without AI, but 24 of them were missed, said Rob Fabrizio, director of strategic marketing, digital radiography and women’s health at FUJIFILM Medical Systems USA, Inc.

"In the X-ray they're normally counting the gauze and in the U.S. the gauze usually has metal fibers in it to make it more detectable in an X-ray, but it's still missed," Fabrizio told HCB News. "So it's very helpful to have this type of software to help the radiologists and the surgeons."

Also in development at Fujifilm is an algorithm that can flag pathologies such as pneumothorax in the emergency room via the FDR AQRO mini mobile DR system.

"Pneumothorax is one of those things that is very commonly missed and [it is] very critical that they react quickly," he told HCB News. "This will hopefully be a very valuable thing for hospitals and patients."

Fujifilm also showcased AI in development for proper patient positioning, which will work with a camera built into the collimator in the X-ray room.

Fabrizio said that AI for digital radiography is not approved by the FDA.