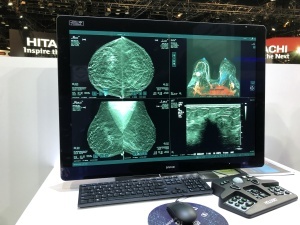 In early November, Hologic introduced its FDA-cleared, AI-powered 3DQuorum technology, which reduces tomosynthesis image volume for radiologists by two thirds, saving an average of one hour per eight hours of daily image interpretation time, according to the company.

3DQuorum, which works with Hologic’s Clarity HD high-resolution imaging technology, produces what the company calls "SmartSlices," 6-millimeter slices with highlighted regions of interest, allowing radiologists to scroll through 23 versus 69 images.

"Anything we can do to help the radiologist perform better is good for patients," Margaret Eckenroad, vice president of women's health for Hologic, told HCB News.

The 3DQuorum technology is available on Hologic's new Unifi Workspace, which also launched at RSNA. Unifi Workspace integrates reading of mammography, MR and ultrasound into one platform, and includes MR-related tools, such as MR CAD with subtraction, colorization and wash-in wash-out curve, MR motion correction and multimodality-enabled hanging protocols.

In its booth at McCormick, Hologic also highlighted ShearWave PLUS, the latest version of SuperSonic Imagine's ShearWave elastography technology for the detection of breast lesions, available on the SuperSonic Mach 30 system.

Tom Livingston, U.S. national sales manager for Hologic, said the company's acquisition of SuperSonic Imagine “fills a gap in the continuum of care.”

In the past, Hologic has distributed products in the SuperSonic Imagine portfolio, but the recent acquisition will allow Hologic to co-brand the product and have more control over future design, Livingston said.