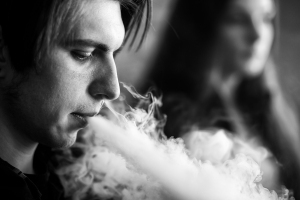 An RSNA panel presentation on e-cigarette medical findings offered insight into the work of physicians sounding the alarm regarding the medical dangers of vaping. One of the panel members had some specific recommendations for radiologists.

Dr. Brandon Larsen, associate professor of laboratory medicine and pathology at Mayo Clinic in Scottsdale, AZ, is on the staff of a pulmonary consultation practice. He said earlier this year they began to receive case referrals from around the country, and it was evident from the first five cases they reviewed that vaping was a bigger problem than initially realized.

“The information that was coming out from early observations didn't match what we were actually seeing in the lung tissue," said Larsen. "Early on, people were thinking there was just an accumulation of lipid oil in the lung ... We started getting these cases flooding in. Instead, what we were seeing in every single case was this very severe injury ... involving the small airways."

He said the pathology presented as an injury to airways and surrounding lung tissue due to toxic exposure. A Mayo study team, including Larsen, published their findings of the first 17 vaping injury cases on which they consulted in The New England Journal of Medicine in October. According to the researchers, it was the first study to more clearly define the pathology of vaping damage to the lungs.

Larsen recommends that radiologists should begin asking patients if they vape — just as they screen for cigarette use. The referring physician, he added, may not be aware that pneumonia, for example, is related to vaping. If the radiologist sees a pattern compatible with e-cigarettes, they are in a good position to raise the possibility of vaping.

“I just had a case this morning ... of a young woman who had lung biopsies where she denied to her parents that she was vaping, but the mother was convinced she was,” explained Larsen. “There are cases in which the history is not entirely clear. The physician community needs to be really vigilant about asking direct questions."