With AI Workflow Suite, Philips partners with Aidoc, MaxQ AI and others 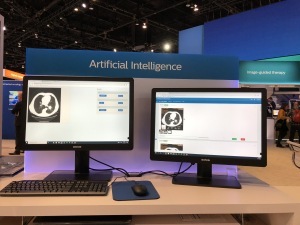 Philips has introduced a platform to bring a curated selection of artificial intelligence (AI) applications into the imaging workflow.

As part of the debut, Philips announced that Leiden University Medical Center (LUMC) in the Netherlands recently signed on as the first healthcare provider to install the platform.

“The key to the game is going to be really translating that directly into the clinical workflow, finding ways to be able to really put that in, so that it’s not just something that’s adjacent or added, so customers don’t have to contract with a million different vendors,” Kevin Lev, the AI solutions marketing lead at Philips, told HCB News during an interview on the show floor in Chicago.

The solution can identify the data sets that are coming in and automatically sends them to the appropriate AI application.

“I would call it automating the automation,” Lev said.

The platform also provides the tools for customers who want to develop their own algorithms and integrate them into the facility’s workflow.

The IntelliSpace AI Workflow Suite can also be used alongside imaging solutions from other vendors. It is part of Philips’ next-generation enterprise imaging solution, recently introduced after the company made strategic investments in research and development and acquisitions.

Philips was recently recognized by Frost & Sullivan as Company of the Year for Artificial Intelligence for Enhanced Radiology Interpretation.