Hospital M&A revenue rose to $11.3 billion in Q2 this year 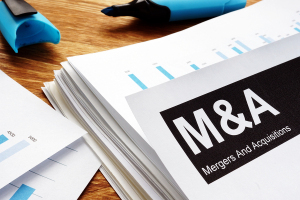 Atrium Health acquiring
Wake Forest Baptist Health
was most notable
Transacted revenue skyrocketed to $11.3 billion for the second quarter of this year, almost four times higher than that generated in the same time last year.

These were the findings of a new Kaufman Hall report on merger and acquisition activity, and come despite a decline in the number of hospital and health system mergers and acquisitions in the same period.

"This trend is simply a response to the changing market,” Anu Singh, managing director at Kaufmman Hall, told HCB News. “To navigate these times, many organizations must make strategic changes.”

The healthcare industry is under a high degree of uncertainty due to the pressure to take on more risk while continuing to cut costs. Small, community hospitals may be operating on a thin profit margin, and as a result, be ill-prepared for industry transformation.

On top of that, both small and large organizations may have trouble competing against new disrupters in the industry, such as Amazon, CVS and United Healthcare.

“Even larger organizations that have made strides in building up sites of care and pursuing ambulatory strategies could also not have the financial or intellectual capital to thrive in a value-based world where clinical and business intelligence are critical,” said Singh.

Kaufman Hall considers Atrium Health’s acquisition of Wake Forest Baptist Health in North Carolina to be the most significant transaction in the second quarter. Atrium health gained an academic medical center and seven hospitals, which have a combined annual operating revenue of over $9 billion.

Another notable transaction was the merger of the Wisconsin-based health systems, Gundersen Health System in Wisconsin and Marshfield Clinic Health System. Once completed, the joint organization will service southwestern and north central Wisconsin, with additional locations in northeastern Iowa and southeastern Minnesota.

The most recently-announced merger is between Sanford Health, based in South Dakota, and UnityPoint Health, based in Iowa. If this deal comes to fruition, the combined organization will generate over $11 billion in annual operating revenue and become one of the 15 largest not-for-profit health systems in the U.S.

About 40 percent of the transactions in the second quarter of this year were divestitures, which involves the sale of one or more hospitals from one health system or hospital operator to another. For-profit health systems were responsible for five out of seven of those divestitures.

Academic medical centers and religiously-affiliated health systems each account for three of the 19 total transactions in the first quarter of this year, while for-profit health systems were responsible for two.

Kaufman Hall expects this trend to continue in the immediate future.