Canon, Toshiba each hit with $2.5 million fine over acquisition deal

Canon, Toshiba each hit with $2.5 million fine over acquisition deal 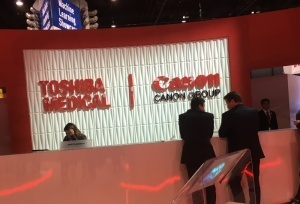 At RSNA 2017 Canon and Toshiba
exhibited side by side
More fallout from the controversial $6.1 billion Canon-Toshiba deal.

The two companies have agreed to pay $2.5 million each to settle federal charges that they violated premerger notification and waiting period requirements of the Hart-Scott-Rodino (HSR) Act with the unusual nature of the 2016 transaction in which Canon acquired Toshiba Medical Systems (TMSC).

“The prior notice provisions of the HSR Act are designed to allow the agencies to analyze a proposed transaction before it is consummated to determine whether it will harm competition,” Bruce Hoffman, Director of the Federal Trade Commission’s Bureau of Competition, said in a DOJ statement about the agreement, noting that, “deliberately structuring a transaction to avoid or delay HSR filing undermines the efficacy of the premerger notification process, regardless of whether the parties’ motives for doing so in a particular case were anticompetitive. We will be vigilant in seeking relief against attempts to circumvent the HSR Act’s filing requirements.”

The complaint and proposed final judgment have been filed in the U.S. District Court for the District of Columbia and now await, after a 60-day public comment period, final court approval.

The settlement also requires that the companies put in place HSR compliance programs and agree to inspection and reporting requirements.

In the complaint, DOJ alleged that the two firms “devised a scheme to avoid” waiting period requirements and that the arrangement “had no purpose” beyond enabling the deal to close before March 31, 2016.

“Canon and Toshiba structured their transaction for the purpose of avoiding the HSR Act’s requirements,” noted Assistant Attorney General Makan Delrahim of the Justice Department’s Antitrust Division. “An acquiring person may not enlist a third party to make an acquisition on its behalf to evade the HSR Act.”

The DOJ complaint alleged that the impetus behind the maneuverings stemmed from “long-running financial irregularities at Toshiba,” which exploded into public view in 2015, and that these revelations, in turn, necessitated that Toshiba “shore up its financial statement,” which it had to do by recognizing the sale proceeds from the deal “by the end of its 2015 fiscal year on March 31, 2016.”

The complaint further claimed that both companies, by their “own admission,” acknowledged the problem. “It simply was not possible to complete a significant acquisition of TMSC voting securities before the end of Toshiba’s fiscal year due to the review periods under various merger control laws.”
1(current)
2