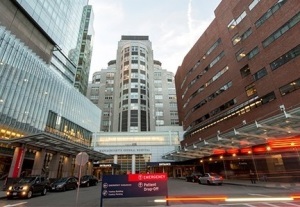 “Creating such a transformative, forward-looking facility is essential for the MGH to continue to build upon its proud two-century tradition as a leading center of exceptional medicine, compassionate care and hope,” MGH president Peter Slavin said in an email to employees on Tuesday, according to the Boston Business Journal. “We want to provide the MGH community with a sneak preview of the facility we are looking to build, and share with you the vision for how our campus is likely to evolve in the coming years.”

The building will be 12 stories tall, with 450 single-bed rooms, according to the Boston Herald. Plans also call for a seven-story utility building.

Construction is scheduled to begin in 2020 and be completed by 2026 – and take the place of the Parkman Garage, Lawrence House, Professional Office Building, Ruth Sleeper Hall, the West End House and an unoccupied structure on North Anderson Street, according to numerous reports.

According to the Journal, the design will have twin six-story towers for the bed rooms, with the lower six floors containing a number of locations serving a variety of functions, including, operating/interventional rooms; a procedural suite; imaging facilities; exam rooms; infusion centers, dietary, pharmacy and clinical support services; and a cafe.

It will also house retail space at the ground level and have six floors of underground parking containing over 1,000 spaces – effectively replacing those lost with the demolition of Parkman Garage.

The hospital project is “the largest construction project that any hospital has ever proposed in Massachusetts,” according to the real estate website Boston Curbed, which noted that Boston Children’s Hospital is undergoing its own $1 billion expansion and Beth Israel Deaconess Medical Center is in the design phase of a new tower as well.

Boston Children’s Hospital's project on its Longwood area campus is a 16-story structure with four floors below grade that will add 71 beds to a total capacity of 472, according to real estate web site BLDUP. It is also adding capacity for the institution's cardiovascular program and adding a Neonatal ICU with single-patient rooms. Completion date for that project is 2021.

The Beth Israel project, a new inpatient building in the Longwood medical area in Boston, was approved in late 2018, according to BLDUP.

Plans call for it to be a 10-story, 345,000-square-foot structure. That will house private patient rooms, imaging facilities, and operating rooms, with a rooftop helicopter pad, according to the news site.