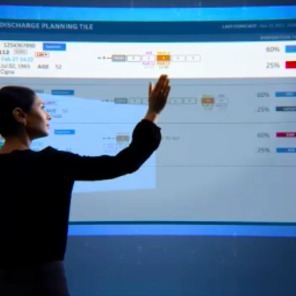 Fifth health system to incorporate
this technology
GE Healthcare recently teamed up with CHI Franciscan Health in Washington to implement an AI-powered command center that will synchronize all aspects of a patient’s hospital experience.

“The future of healthcare is breakthrough medicine, as is demonstrated by the recent Nobel Prize winners who were recognized for discovering a type of immunotherapy that has revolutionized cancer care,” Jeff Terry, CEO of Command Centers at GE, told HCB News. “AI-platforms, including command centers, are essential to efficiently and reliably put that evidence-based medicine into practice.”

The Mission Control Center combines AI and predictive analytics to simultaneously monitor each patient in the health system. It continuously analyzes real-time patient data to recommend actions that can predict and prevent risk, balance staff workload and streamline the discharge process.

“The AI itself is revolutionary but it’s not enough,” said Terry. “It’s the AI coupled with an experienced practitioner following a rules-based protocol to effectively help care teams in the right way in the moments that matter.”

The control center is staffed with licensed providers that monitor and leverage analytic apps that are carefully crafted to solve a specific issue. One of the apps monitors all patients scheduled for discharge and identifies and addresses issues that could lead to significant and preventable delays.

Johns Hopkins and Humber River Hospital were the first to join. This idea of a command center began to take hold when 15 organizations attended the opening of Humber River’s Command Centre in December 2017.

“GE’s initial strategy for what has become ‘command center’ included the concept of an ecosystem,” said Terry. “The simple idea was that by transparently sharing learning and apps, each provider in the ecosystem could more quickly impact outcomes and efficiency. The ecosystem is growing quickly as more organizations begin command center programs with [us].”