My visit to Ultra Solutions 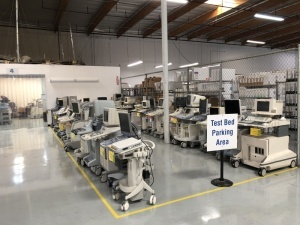 Testing units at Ultrasound Solutions
It was just a few weeks ago I went to California for AAMI. As part of that trip, I wanted to stop by Ultra Solutions and see the operation with my own eyes. My colleague Colm Ford was my chauffeur so I could sit back and enjoy the view.

We were met by the CEO, Sterling Peloso, and I remember being impressed by how neat and organized his office was. In fact, is was so neat it mad me ashamed to think about all the piles of paper in my office.

Sterling is a down to earth sort of guy like so many successful people but he did have one of those inflatable clowns that you could punch. It had some person's photo on it but I was afraid to ask who it was.

Like so many firms I visit the staff was easy going but serious. People were at ease but also focused.

I was impressed by the probe repair department, but what impressed me the most was the stable of ultrasound machines used to test probes and boards that the company repairs (see the photo).

I asked Sterling why he needed such a big inventory of test units and he said he follows marked demand.

Sterling also told me about the California inspections he passed and told me stories about firms that do not follow the rules and hurt the market.

We also met Ricardo Armenta a very well known engineer- turned sales person- who sells in Latin America for Ultra Solutions. In fact Llauger Minaya and I saw Ricardo the very next week at the show in Mexico City.

We had a great visit to Ultra Solutions and we wish them the best of luck in the future.