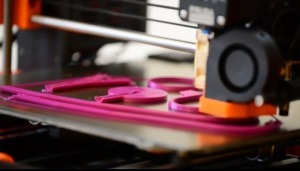 The stethoscope is printed using plastic
used to make Lego and lawn chairs.
Courtesy of Schulich Medicine & Dentistry
Researchers at the University of Western Ontario created an open-source, clinically-validated template for a 3-D-printed stethoscope for regions of the world that have limited access to medical supplies.

“A basic [fused deposition modeling] FMD printer can be purchased already assembled and ready to go for $300,” Dr. Tarek Loubani, associate professor at Western’s Schulich School of Medicine and Dentistry, told HCB News. “On the other hand, the average cost of a used SonoSite M-Turbo ultrasound is $19,333.”

He saw the need for a cheaper diagnostic tool when he worked as an emergency room physician in Gaza during wartime, when medical supplies were often in short supply. In developed countries, physicians rely on ultrasound, CT and other diagnostic technologies, but stethoscopes are still necessary tools in low-income countries.

With the Gila template, a stethoscope can be 3-D printed in less than three hours using a plastic that’s used to make garden chairs and Lego products. It costs under three dollars to produce the 3-D-printed stethoscope, and Loubani and his team confirmed it has the same acoustic quality as the best stethoscopes on the market.

“The best FDM printer available on the market is probably the Prusa i3 MK3, which retails at $749 for a kit printer,” said Loubani. “In Gaza, we make replicas of the Prusa i3 MK2S (last model), which run us around $200 to make on site.”

Going forward, the team plans to create templates for other medical devices that can be 3-D printed on site in low-income regions. They are already working on a tourniquet, a pulse oximeter, an otoscope, an ECG, and eventually a dialysis machine.

“Our end goal is to create a vibrant repository of high-quality open-access medical devices that institutions across the world can share, customize and improve upon for their needs,” said Loubani.