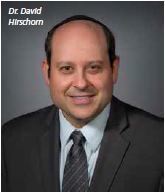 In the last issue of HealthCare Business News, Dr. David Hirschorn, chief of informatics, imaging service line, at Northwell Health, talked about the background of radiology workflow orchestration and some of the workarounds that radiologists used to make the most of very limited information.

Major strides have been made to provide radiologists with the tools and information they need to be most effective in their roles. Fortunately, good radiologists already had a solid foundation for optimizing their use of workflow orchestration.

Big teams of radiologists working together have only become more common in recent years, so developing best practices for the social aspects of the role would be up to the radiologist, or perhaps he or she would be able to get guidance by networking outside of their facility. Communicating what type of information they needed was also a slow evolution, with more usable data trickling into EMRs over time.

“There’s definitely room for improvement. It’s only the beginning,” Hirschorn says. “Gathering information from the EMR has been very transformational for many of the radiologists I’ve worked with.”

“By the time the radiologist came in, we’d see the image and very little info on why the patient was getting examined. So, with EMR, we’re not just getting access to that information. We’re having it served up on a silver platter,” says Hirschorn.

The EMR is providing the background that helps radiologists be a more integral part of better patient outcomes.

“We get the chief complaint, the history of illness and the problem list,” Hirschorn explains.

The running problem list includes if the patient is a diabetic, has cancer and other important issues to note. Medication and allergy information is also helpful, Hirschorn says. He says it’s also key to providing a working diagnosis. For example, did the patient come in for a fracture? For chest pains?

“It’s much better. There are fields I want every time and I can quickly access them now. There’s also other information I’d like to know, depending on why the patient was there,” Hirschorn says.
1(current)
2