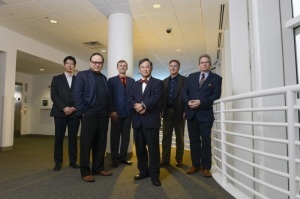 The team of scientists and physicians
who are heading up the heavy ion project
at UT Southwestern Medical Center
From the September 2017 issue of HealthCare Business News magazine
At present there are just eleven heavy ion radiation therapy facilities in the world, and none of them are in the U.S. But a team at the University of Texas Southwestern Medical Center plans to change that. HealthCare Business News spoke to Dr. Arnold Pompos, associate professor of radiation oncology at UT Southwestern, to find out why heavy ion therapy is so promising and what steps need to be taken to further evaluate and understand the potential benefits of the cutting-edge treatment.

HCB News: By way of introduction, can you tell us briefly what heavy ion therapy is and how it compares to conventional radiotherapy?
Arnold Pompos: Radiation therapy of cancer is a deposition of ionizing energy to tissue. This ionizing radiation breaks chemical bonds, alters DNA molecules and kills cancer cells. Heavy ion therapy deposits the above- mentioned ionizing energy via charged particles, namely via accelerated nuclei of atoms heavier than hydrogen. Conventional radiation therapy uses X-rays for the same purpose. Heavy ion therapy has many advantages over conventional therapy. A narrow beam of charged particles can be precisely steered to the tumor location. No heavy radiation collimating blocks are needed as with X-rays. Heavy ions stop at the tumor, where they deposit most of their energy, unlike X-rays, which deposit most of their energy upstream to the tumor. In addition, X-rays continue ionizing tissue beyond the tumor target. The biological effectiveness of heavy ions such as carbon atom nuclei is about the same as of X-rays upstream to the tumor, where healthy tissue is located, but increases several fold when they reach the tumor target. This is not the case with X-rays. Their biological effectiveness is the same across the whole patient body.

HCB News: How was the National Center for Heavy Ion Radiation Therapy conceived and when do you expect it to begin treating patients?
AP: UT Southwestern Medical Center is constantly seeking to offer the best and the most advanced therapy to our patients. Because there is a limited number of heavy ion centers around the world, the full potential of this form of therapy is yet to be uncovered. There is a lot of interesting and cutting-edge research to be conducted. This exactly matched the mission and the goals of UTSW, hence came the idea: If heavy ions are to be brought to the U.S., UTSW is definitely one of the places to do it. Treatment of the first patient is planned to start three to four years after construction started.

HCB News: What are the major steps that still need to take place?
AP: UTSW was fortunate enough to be awarded one of the two nationwide planning grants issued by the National Cancer Institute (NCI), one of the institutes of the National Institutes of Health (NIH). This prestigious grant allowed us to plan the research component of the heavy ion system. We were also fortunate to receive a two-to-one matching grant from the state of Texas, which allowed us to plan out the whole heavy ion therapy center itself, not just its research component. That being said, the first step, the so-called schematic design, is complete. This means we are ready for the next step, creating the construction documents and starting to build the center. We are working on securing the construction funds. To put the resources needed in perspective, the whole center, from A to Z, can be built and equipped with funds less than the cost of a single 250-seat airplane!
1(current)
2