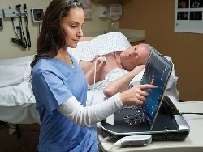 Highly-skilled cardiologists at hospitals and cardiac centers around the world are gradually opting for interventional techniques to treat cardiovascular diseases.

As a result, the global interventional cardiology market is expected to grow at a compound annual rate of 7 percent from 2017 to 2021, according to a recent Technavio report.

Stent technology has evolved over the last 15 years, according to Tom Watson, senior clinical analyst at MD Buyline. The initial concept involved balloon angioplasty to open a partially blocked vessel and then placing scaffolding inside to keep it open.

After that, drug-eluting stents emerged, which held the vessel open and also provided a slow release of medication to prevent re-occlusion.

The most recent advancement in stent technology are the bioresorbable stents that dissolve after about three years. Conventional stents are made of metal, but Abbott’s Absorb is made of a naturally dissolving material.

Abbott’s thinking was if it made a stent bioresorbable, patients might not have to take the anticoagulant medications, according to Diane Robertson, director of health technology assessment at ECRI Institute.

A vessel can become irritated when a metal stent is implanted and starts to proliferate cells that build up and can close off the vessel again. Because of that, patients are required to take anticoagulant medication for at least two years.

“The question now is whether they work any better than the drug-eluting stents and whether a patient can stop taking these drugs sooner than they can with the drugeluting stents,” says Robertson.

That remains to be seen, but ECRI has conducted research to find out if the bioresorbable stent is as effective as the conventional stents. For the study, it reviewed 15 abstracts published between Jan. 1, 2010, and Feb. 4, 2016, that assessed the safety and efficacy of Absorb.

Robertson adds that hospitals have much to consider regarding stent technology. They need to decide whether they want to purchase the new stents, and if so, how many they want to stock as well as if they are going to continue to use the conventional stents.

TAVI coming to a hospital near you
Transcatheter aortic valve implantation was introduced about 15 years ago, and over the last decade it has grown as a therapy for higher-risk populations.

“The patient population that it’s being qualified for is gradually expanding. There are more sizes and more choices for the interventionalist to use, so that more patients can potentially be considered for this,” says MD Buyline’s Watson.