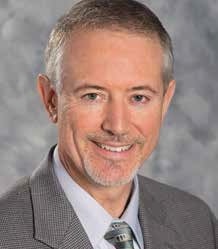 HealthCare Business News recently caught up with Tim Bollig to learn more about his history in health care and to get the latest about medical imaging at Mercy Hospital, part of Allina Health.

HCB News: What inspired you to get involved in health care?
Tim Bollig: My mom was a nurse who worked part time at various RN positions. At one point she was a public health nurse in the community we lived in, and she took me along on some business inspections. Our family had a close friend who was a physician. One time at a local festival, we came upon a carnival worker who was badly burned while refilling a fuel tank for a ride. Our MD friend was caring for him, and looked at me and told me to find someone to call an ambulance. So from a young age, I liked the feeling of helping someone who is injured, and surprised myself at remaining calm during a stressful situation.

HCB News: How did you get involved with Mercy Hospital?
TB: I have been with Allina Health on and off for the past 25 years. I started as an MRI technologist in 1989. At that time, in the Minneapolis-St. Paul area, most of the MRI service was provided by mobile operators. The company I worked for would go to multiple hospitals all over the metro, and I would work at a different site almost every day. Eventually, the system that would become Allina Health bought out the mobile provider and hired me to work at Unity Hospital. Mercy and Unity hospitals are closely associated, and at that time, I took calls for both. I was a lead technologist at Unity, worked for two years for a radiology practice as a supervisor and was then hired as a manager at United Hospital, part of Allina Health, in St. Paul. After working there for 10 years, Mercy was in need of a leader, so I came back to Mercy and have been here for two-and-a-half years.

HCB News: What recent developments would you like to discuss?
TB: Mercy was planning on adding a second MRI to the main department. It was exciting to be part of a design and build team for this new addition to the building. One of the challenges was that the initial design placed a computer room in between an existing 1.5T system and the new 3.0T system being installed. I had seen sites with common control areas, and knew that there were benefits to that type of design. I was able to convince my VP that spending a little more money on the front end of the project could result in operational savings for years to come.

Now we have two magnets with a common control area, and it is working well. The cardiology practice at Mercy owned and operated the cardiac CT and MRI scanners in the hospital when I arrived. Both scanners were not being used to their potential. After the MRI project, Mercy was slated for a new CT scanner. Part of the motivation to get the new MRI was to discontinue the use of the old cardiac MRI. The same thinking was applied to the CT replacement. We needed a CT that could perform all of the bread-and-butter exams we were doing, plus have the capability to provide CCTA. We evaluated multiple vendors and what they had to offer at the time.
1(current)
2