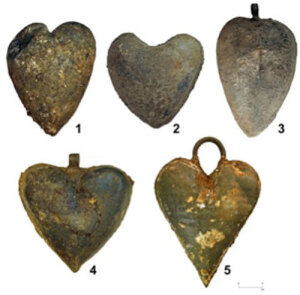 Picture of the five
heart-shaped lead urns. Image by
Rozenn Colleter, Ph.D./INRAP
As the French say, "Toujours l'amour." Now they can add "Toujours heart disease" to that.

Archaeologists with the National Institute for Preventive Archaeological Research uncovered mummified hearts in five heart-shaped lead urns in June 2015, while digging in the basement of the Convent of the Jacobins in Rennes, France, which researchers had been excavating from 2011 to 2013, according to Reuters.

Three of the four hearts showed disease signs, such as plaque on coronary arteries. The fifth heart was not well enough preserved to be studied.

"Since four of the five hearts were very well preserved, we were able to see signs of present-day heart conditions, such as plaque and atherosclerosis," study author Dr. Fatima-Zohra Mokrane reported. The graves of the nobles dated back to the late 16th or early 17th century, she adding in her report of her study presented recently at the annual meeting of the Radiological Society of North America (RSNA).

"Every heart was different and revealed its share of surprises," anthropologist Rozenn Colleter of the French National Institute for Preventive Archaeological Research said on Wednesday. "It is very rare in archaeology to work on organic materials. The prospects are very exciting."

At first the scientists tried to get health data from the hearts while they were still embalmed, but that proved difficult, observed Mokrane, a radiologist at Rangueil Hospital at the University Hospital of Toulouse in France.

So the team, which included radiologists and forensic physicians, archaeologists, pathologic physicians and physicists from the Molecular Anthropology and Synthesis Imaging and the Institute of Metabolic and Cardiovascular Diseases, carefully cleaned the hearts of embalming material and redid MR and CT studies.

Their efforts were successful — the new images allowed them to identify the different heart structures, such as chambers, valves and coronary arteries. They then rehydrated the hearts and were able to identify myocardial muscles with MR. They also then employed standard techniques, such as dissection and histology, to examine the heart tissues.

And as for l'amour?

Two of the hearts were buried together. The heart of Toussaint Perrien, Knight of Brefeilla, was preserved at his death and later buried with Louise de Quengo, Lady of Brefeillac, whose preserved body was also found at the site.

"It was common during that time period to be buried with the heart of a husband or wife," Mokrane said. "This was the case with one of our hearts. It's a very romantic aspect to the burials."