This Month in Medical History - The first kidney transplant 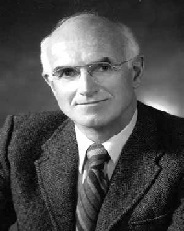 Dr. Joseph Murray
From the December 2015 issue of HealthCare Business News magazine
In 1954, Richard Herrick had just returned home to Massachusetts from serving in the Coast Guard. But instead of enjoying his homecoming with friends and family, Herrick was hospitalized with kidney disease. At the time, the diagnosis meant his days were numbered.

But before the 23-year-old Herrick could even begin to accept his fate, his doctor, Dr. David Miller, thought of the research being done by a group of physicians and scientists at a hospital and the Harvard Medical School nearby. The group was working to figure out how to transplant healthy kidneys into individuals who suffered from organ failure. In fact, the physicians were looking for a potential candidate just like Herrick for the first procedure — the patient happened to have a twin brother.

Herrick was lucky to have Miller as his physician. After all, many medical professionals were vocal skeptics of the physicians researching organ transplantation. One doctor went as far as calling the group at Harvard “a bunch of fools” for their interest in the effort. These “fools” were led by Dr. Joseph Murray, a young surgeon and professor at Harvard Medical School.

Upon graduating from medical school, Murray was drafted and spent World War II working at a hospital in Pennsylvania. That’s where he first worked on transplanting skin tissue on many burn victims and spent a lot of time thinking about tissue rejection. His experience showed him that skin grafting rejection was nearly non-existent when the transplant came from a patient’s relative.

After the war, Murray returned to Massachusetts to work with an enthusiastic doctor studying kidney transplantation at the Surgical Research Lab at Harvard Medical School. Much progress was made, but the potential for the body rejecting a transplanted organ as a foreign object was an outstanding problem. However, Murray hypothesized that transplanting organs between twins would avoid this issue, as his experience with skin tissue transplants had shown.

By the mid-1950s, Murray and his team believed that a successful operation would be technically feasible. Two days before Christmas in 1954, Richard Herrick was brought into one of the operating rooms at the Peter and Bent Brigham Hospital (now known as Brigham and Women’s Hospital). The surgery took about five and a half hours. As Murray predicted, Herrick’s body did not reject his twin’s organ, and he lived for eight more years. After the successful surgery, Murray went on to perform nearly 20 other kidney transplantations among other twins.
1(current)
2