The past, present and future of mobile imaging 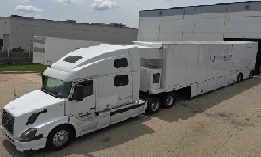 Smith’s company, Medical Coaches, has remained in business ever since. In the ‘70s, when CT was emerging as a costly and desirable new modality, Medical Coaches was preoccupied with business in Iran, leaving room for new competition to enter the domestic mobile imaging market.

Ellis & Watts out of Ohio and Calumet Coaches out of Illinois were among the first big competitors to meet that need. “That really started the boom of the mobile high-end screening business,” says Geoff Smith, president of Medical Coaches and son of Ian Smith. Over the next decade or so, a handful of successful companies emerged and today most competitors in the mobile imaging market can trace their roots, in one way or another, to that bygone era when CT (and later MR) were new, and relatively exotic.

Shared Medical Services emerged out of northern Minnesota in 1980. Founder John Arington’s success followed a similar pathway of expansion, adding MR to CT, as well as bone densitometry. In 1983, Alliance HealthCare was founded as a mobile CT provider. Today it claims to be the largest provider of advanced outpatient diagnostic imaging services in the U.S. Medical Imaging Centers of America (MICA) was another highly successful company to rise up in this era. The company’s vice president and chief financial officer, Ray Stachowiak, used his knowledge and experience to start his own company, Shared Imaging, which has enjoyed over 20 years of success, and credits it largely to a footprint that allows it to provide flexible solutions to a diverse customer base.

In 1995, Jim Gallagher joined the company and remained for 13 years before setting out on his own with LG Medical, a mobile imaging company. In the early ‘90s PET started to gain ground as an imaging modality and was followed by PET/CT. It was around that time that Bob Bachman, formerly of Calumet Coaches, set out to start AK Specialty Vehicles with his business partner, Larry Sodomire, which they sold to OshKosh in 2006. After that, Bachman and Sodomire started Advanced Mobility.

John Vartanian had been a service engineer for a number of companies before starting Medical Imaging Resources (MIR) in 1992. All the while, Medical Coaches continued plugging away at its own mobile imaging business and it was relatively smooth sailing until the recession in 2008. The industry underwent drastic changes as revenue decreased, trailer manufacturing fell off and new legislation called for a restructuring of the business model.
1(current)
2
3
4
5

DispatchHealth expands into radiology with acquisition of Professional Portable X-Ray

Digirad to sell DMS Health for over $18 million