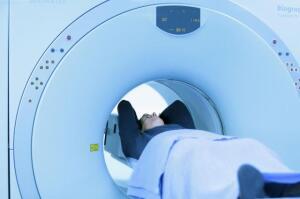 Credit: The University
of Manchester
Researchers in Manchester have applied a new technology to PET scans that reduces the amount of radiation exposure by up to 30 percent for patients and medical staff.

For their study, published recently in the journal Nuclear Medicine Communications, the scientists from Central Manchester University Hospitals NHS Foundation Trust and the University of Manchester used a technology called time-of-flight (TOF) when performing the scans on cancer patients.

TOF reduces image noise by measuring the difference in arrival time between the two gamma rays produced when positron particles emitted by the radiotracer interact inside the body. This allows the person reading the scan to more accurately locate the origin of gamma rays — and subsequently the tumors — within 8 centimeters, explained Ian Armstrong a nuclear physicist at Central Manchester University Hospitals, who led the study.

The scientists used TOF to simulate giving a lower dose of the radiotracer fluorodeoxyglucose (FDG) to the patients, and to simulate a shorter scan.

“We didn’t want to compromise the detectability of any lesion,” Armstrong told HCB News.

The researchers found that they could reduce the amount of FDG given to patients by 20 percent, from 350 megabecquerel (MBq) to 280 MBq — smaller patients were given a smaller dose of 150 MBq — and reduce the scan time by 20 percent, from 18 minutes to 14 minutes, and still have a clear image. The shorter scan time allows for additional 100 scans a year at Central Manchester University Hospitals.

Over the entire population, radiation exposure was reduced 30 percent.

The lower dose also has an impact on the medical staff.

“With a PET scan, a patient is radioactive, so there is a certain amount of radiation dose” staff is exposed to, Armstrong said. “We were very keen to bring it down so our scanning technologists also received less radiation dose.”

In the UK, there’s a body that specifies the maximum amount of radiotracer that should typically be used. Most centers use close to the maximum, which is 400 MBq, Armstrong said.

“That really hasn’t changed for 10 years,” Armstrong said. “There is absolutely no need to be giving close to what has been used for many years.”

Armstrong hopes the research will get radiologists to think more about radiation dose in PET scans.

“There are a lot of physicists that share my vision in the UK,” Armstrong said. “It’s small steps, and I think things will change over the next few years.”