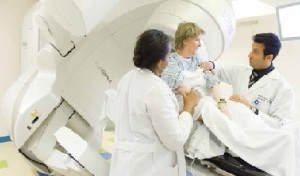 New York Methodist Hospital (NYM) in Brooklyn recently installed a new stereotactic body radiotherapy (SBRT) system and the oncology team can now target tumors anywhere in a patient’s body from almost every angle. Some patients are even able to undergo the procedure in only a few minutes. There are a variety of SBRT and stereotactic radiosurgery (SRS) systems on the market with unique offerings. NYM chose Varian’s TrueBeam Radiotherapy System because it believes it delivers the same high radiation dose rate as the other systems, but can be used to treat a wider range of indications including large-sized cancers and tumors smaller than 1 centimeter.

Elekta’s Gamma Knife was specifically designed to treat brain tumors and Accuray’s CyberKnife has a robotic gantry that can be moved in any position. But what all the systems have in common is that hospitals are becoming increasingly interested in the technology. “Both the numbers of patients and the sites being treated with stereotactic radiosurgery are on the rise,” says Dr. Hani Ashamalla, chair of the department of radiation oncology at NYM. “We are currently treating lung, spine, brain, and liver tumors with stereotactic radiosurgery. We anticipate that the number of patients seeking this type of technology will continue to increase, since it delivers very effective and precise doses in a short period of time.”

Growing use of SBRT and SRS

Surgeons attempt to remove an entire tumor with surgery, but it’s a very difficult task and oftentimes some of the tumor remains. More surgeons are now turning to SBRT and SRS to remove the remainder of a tumor. “Radiosurgery is very effective for small tumors, but if you just cut up a majority of a large tumor and make the part that is left over small, then radiosurgery can handle that effectively,” says Dr. Lijun Ma, a physicist from the University of California San Francisco radiation oncology department.

At first, many surgeons were reluctant to use SBRT and SRS. There have been questions about whether it can cause cancer and if it will make it more difficult to perform surgery afterward. “Skull-based surgeons are really good at what they do and are very proud of their surgical skills,” says Catherine Gilmore-Lawless, vice president of clinical intelligence at Elekta. “Their acceptance of radiosurgery as an integral part of their treatment strategy has been increasing over the last 20 years.”
1(current)
2
3
4
5