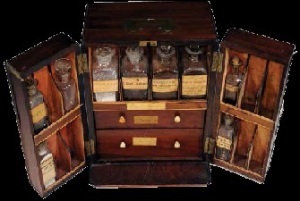 Each month, we visit Dr. Blaufox’s Museum of Historical Medical Artifacts to take a look back at the medical equipment that cleared the way for what patients encounter in doctors’ offices and operating rooms of today. Some equipment may be recognizable, while other featured inventions have since become obsolete or have had their usefulness discredited.

Estimated Date: 1850
Manufacturer: D. Stewart
Description: Measuring 9.5” x 10.5” x 7”, this mahogany cabinet opens to reveal drawers and shelves. The poison cabinet in the rear contains four pontiled bottles. Stewart label on the cover has been pasted over original manufacturer’s (possibly English). The four original pontiled bottles are in the main cabinet. Five of 12 bottles are held in the shelves in the doors. Three are original, with handwritten labels that read “C. Winslow, M.D. Pharmacist.”

The two drawers contain replacement weights and scales. A letter of Winslow’s life, obtained from his granddaughter, is in the chest. She discovered that I owned the chest when I sent a letter to her granddaughter, who worked at the Maryland Historical Society, inquiring about Dr. Winslow. His son was a doctor as well. According to her note, Caleb Winslow received his M.D. from the University of Pennsylvania in 1849. He graduated Haverford College in 1842, which was previously the Philadelphia College of Pharmacy (thus his designation as pharmacist).

He practiced in North Carolina from 1849 to 1870, then he moved to Baltimore. He took over the practice of his deceased brother Dr. John Randolph Winslow. He was blocked from going into surgery by “colleagues” and practiced general medicine and obstetrics. He retired in 1890 and died in Baltimore in June of 1895. He is said to have operated on 100 cases of bladder stone with only one death prior to coming to Baltimore. He also served as an examiner in surgery on the original board of medical examiners of North Carolina. His biography (slightly different from his granddaughter’s version) can be found in Cordell, E.F. The Medical Annals of Maryland 1903.